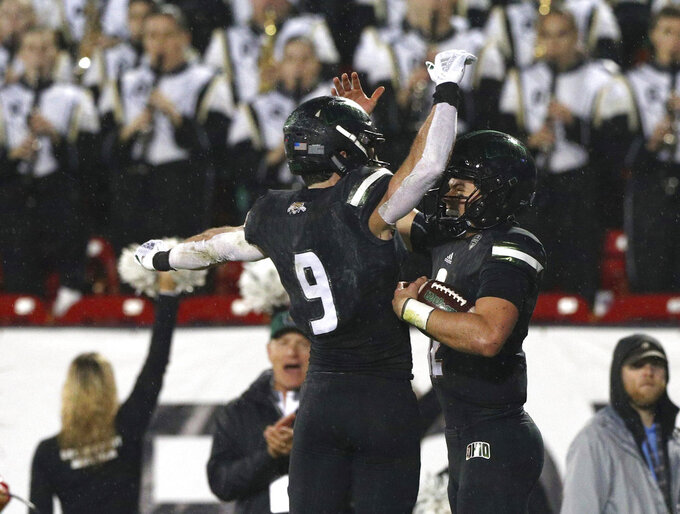 FRISCO, Texas (AP) — Ohio running back A.J. Ouellette doesn't think of Frank Solich as the oldest head coach in FBS. He sees him as the guy who stuck around a smaller program long enough to run it for going on 15 years.

Ouellette gave Solich and the Bobcats a little something to build on in his final game.

The senior had his fourth straight 100-yard game with 164 yards rushing, quarterback Nathan Rourke accounted for all three touchdowns and Ohio rolled to a 27-0 victory over San Diego State in the drizzly Frisco Bowl on Wednesday night.

Ohio (9-4) finished with six wins in seven games and won a second straight bowl game under Solich, who became the oldest head coach in FBS at 74 before bowl season when 79-year-old Bill Snyder retired at Kansas State.

"To have him a little older than most coaches, young coaches are at a school a couple of years and they leave," said Ouellette, who finished among Ohio's career rushing leaders with 3,784 yards. "Him being there 14 years, we've just been lucky that he stayed around."

Solich spent 19 years on Tom Osborne's staff at Nebraska before replacing the coach at his alma mater in 1998.

After six years in charge of the Cornhuskers, Solich was forced out following a 9-3 season, a year after a 7-7 record that ended a streak of 40 straight winning seasons. A year later, he took the Ohio job and has taken the Bobcats to 10 bowls in 14 seasons.

"I feel like I still have a lot of energy," Solich said. "I still feel like I communicate well with players and coaches. I'm not feeling like the oldest coach, at least not tonight."

San Diego State was shut out in a bowl for the first time since its first postseason appearance — a 53-0 loss to Hardin-Simmons in the 1948 Harbor Bowl at long-since-demolished Balboa Stadium in San Diego.

The Aztecs had 44 of their 287 yards on one run by Juwan Washington while losing a fourth straight game in a season for the first time in eight years under coach Rocky Long. The fourth-best run defense in FBS gave up a season-high 215 yards rushing to Ohio.

San Diego State's first meeting with Ohio was its first loss in 15 games against Mid-American Conference teams. The 27-point margin ended a streak of 10 straight games decided by single digits for the Aztecs, which the school said was the longest such streak since at least 1980.

"I think you have to look at everything you do, from the top on down," Long said. "We can delve into this as deep as you want. And we're evaluating everything in our program. And it might be nothing but we don't have one big-time player. That might be the difference."

San Diego State: Long is one of five current coaches to lead his team to a bowl in each of his first eight seasons. The Aztecs, who have been to nine straight bowls, are 3-5 in the postseason under Long with consecutive losses in the Dallas area. Army was a 42-35 winner in last year's Armed Forces Bowl in Fort Worth.

Ohio: The Bobcats have a 1-1 postseason record in Texas, getting even 56 years after losing to West Texas State 15-14 in the school's first bowl appearance in the 1962 Sun Bowl in El Paso. The school's only other game in Texas was in nearby Denton, a 31-30 double-overtime win against North Texas in 2009.

Light rain that fell throughout the first half didn't seem to bother Rourke. The junior fooled the entire San Diego State defense with a fake handoff to Ouellette and ran untouched 9 yards around left end to cap a 15-play drive for a 10-0 lead in the second quarter.

Rourke's other scoring run was from 11 yards before halftime, and he threw a 35-yard TD to a wide-open Andrew Meyer near the goal line on a flea-flicker from Ouellette in the fourth quarter. Rourke was 10 of 22 for 206 yards passing with 44 yards rushing.

San Diego State: Standout LB Kyahva Tezino is eligible to enter the NFL draft, so his decision will go a long toward determining the Aztecs' hopes of getting back to 10 wins after a two-year streak ended. San Diego State opens at home against Weber State on Aug. 31.

Ohio: Solich's 15th season should be the third as a starter for Rourke, who is losing his top running back in Ouellette and three of his offensive linemen. The Bobcats open at home against Rhode Island on Aug. 31.