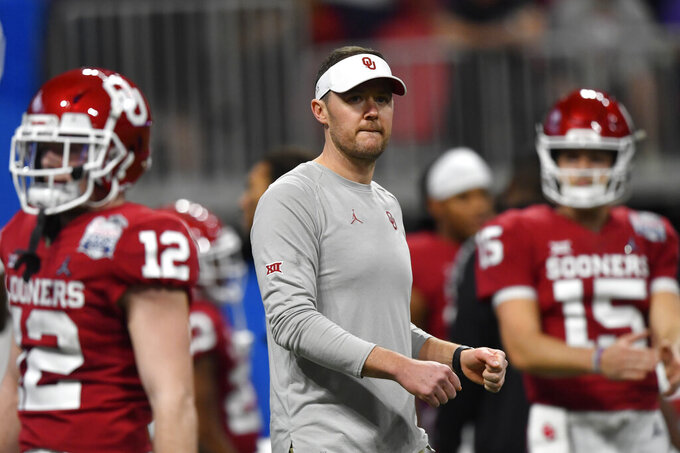 FILE - In this Saturday, Dec. 28, 2019, file photo, Oklahoma head coach Lincoln Riley speaks with his team before the first half of the Peach Bowl NCAA semifinal college football playoff game against LSU, in Atlanta. Riley already has coached Heisman Trophy winners Baker Mayfield and Kyler Murray along with Heisman runner-up Jalen Hurts. Now, he is hoping to build a new tradition at Oklahoma - pulling top quarterbacks to Oklahoma from the high school ranks. Caleb Williams, the No. 1 quarterback in the 247Sports Class of 2021 and ESPN’s No. 1 dual-threat quarterback for that class, has committed to OKlahoma.(AP Photo/John Amis, File)

OKLAHOMA CITY (AP) — On his official visit, Caleb Williams was scheduled to chat with Oklahoma coach Lincoln Riley for 20 minutes.

“I was very comfortable, very peaceful,” Williams said. “I guess you could say, like, chill.”

Williams has since committed to the Sooners. The No. 1 quarterback in the 247Sports Class of 2021 and ESPN’s No. 1 dual-threat quarterback for that class recently was named MVP of the prestigious Elite 11 camp. His nickname is “Superman."

Riley already has coached Heisman Trophy winners Baker Mayfield and Kyler Murray along with Heisman runner-up Jalen Hurts. Now, he is hoping to build a new tradition at Oklahoma - pulling top quarterbacks to Oklahoma from the high school ranks. Mayfield, Murray and Hurts started at other colleges. But now Spencer Rattler, the No. 1 high school quarterback of the 2019 class, came to Norman out of high school and will compete for the starting job this season.

Part of the 36-year-old Riley's success comes from being both an offensive mastermind and a down-home guy from tiny Muleshoe, Texas. He remains approachable and easy to talk to, even with having reached the College Football Playoff in all three of his seasons as head coach.

“He's not an old, old guy who walks around hunched over a bag, play sheet in his hand and hat on all the time,” said Williams, who starred for Gonzaga High in Washington, D.C. “He's a young coach, which is nice. It's really just a connection between me and him."

Williams was impressed with how Riley elevated Hurts, who wasn’t known as an elite passer at Alabama but turned in one of the most efficient seasons in NCAA history last season. Hurts was drafted in the second round of the NFL draft in April.

“Jalen Hurts was supposedly a runner at Alabama, then he comes to Oklahoma and does what he does,” Williams said.

Riley still calls offensive plays for the Sooners. Williams said Riley's system remains a step ahead of the competition.

“His system is so quarterback friendly,” Williams said. “As coach Riley would say, it doesn’t matter -- he’s going to adjust. He’s going to find the best plays, best players on the field at one time to go try and win the game.”

Riley said the system is strong because of continuity on his staff.

“We’ve got a creative room,” Riley said. “We’re not scared to throw new things up there, even if nobody’s ever done them. We’re not scared to tell each other when we think we’re wrong. We work well together. So it’s been a good environment to be creative.”

Riley's drive to improve has impressed Williams. Riley said his goal is to lead by example.

“We always expect to improve and we always expect our players to improve,” Riley said. "It’s hard for us to ask them to do that if we’re not putting in work ourselves to get better and to continue to be on the cutting edge and do things that give our players the best advantages we can find.”

Oklahoma's injury- and suspension -depleted defense was exposed in a 63-28 loss to LSU in the Peach Bowl last season. Williams has made it his mission to help recruit top defensive talent to join the Sooners.

“I know that defense wins championships, and I've been on those guys (top prospects), trying to get these guys to come along and kind of buy into it," Williams said. "Come along and let's go win a few Big 12s, playoff games and national championships.”