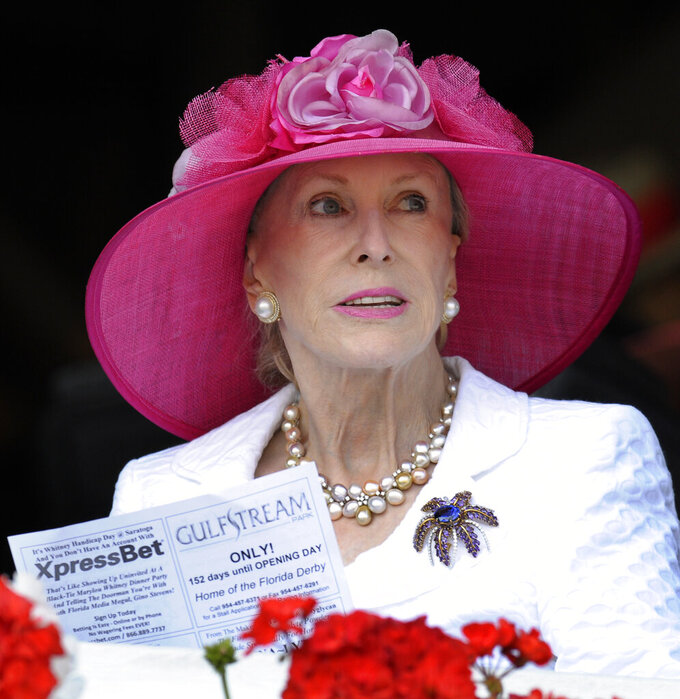 FILE- In this Aug. 7, 2010, file photo, Marylou Whitney watches horse racing from her box seats at Saratoga Race Course in Saratoga Springs, N.Y. Philanthropist, socialite and horse-racing enthusiast Marylou Whitney, known as the "Queen of Saratoga," died on July 19, 2019, at her Saratoga Springs estate after a long illness. She was 93. (AP Photo/Hans Pennink, File) 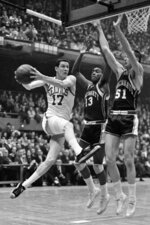 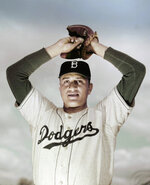 They ran the next legs, taking the baton from Jackie Robinson as black players claimed their place in the game.

One was on the mound for those Brooklyn Dodgers teams of the 1950s, and woe to the hitter who found Don Newcombe glaring down at him. The other was in the batter’s box and compelling in his own right. Frank Robinson hunched over the plate and dared any pitcher to throw it his way.

Newcombe, “Big Newk,” knew the sting of segregation traveling from city to city. Martin Luther King Jr., it is said, later thanked him for making his work easier. That was a month before the civil rights leader was slain. Frank Robinson set the course for black managers, starting with Cleveland in 1975 and taking his fire and savvy to other dugouts.

Sports also lost part of the core of two dynasties — Bart Starr, the unflappable gentleman quarterback of the Green Bay Packers, and John Havlicek, unerringly clutch and perpetually in motion, of the Boston Celtics. One was immortalized for a sneak, the other for a steal.

He came out of the Negro Leagues and played with Jackie Robinson and Roy Campanella, the three finding their way together and putting baseball on a new and testing path.

In his first season in 1949, two years after the game’s racial barrier fell, Newcombe went 17-8 and was the NL Rookie of the Year. He won 20 games three times.

Newcombe was knocked for his postseason play, a criticism for which he felt unduly singled out. In 1951, he pitched into the ninth against the Giants and was lifted for Ralph Branca before Bobby Thomson delivered the “shot heard ‘round the world.”

But when that luminous day came for the Dodgers in 1955 — a World Series title after so many maddening Octobers — Newcombe was also there. He went 20-5 that year, homering on the day of his 20th win. He was one of the best hitting pitchers.

The next year, the 6-foot-4 right-hander was 27-7, capturing the first Cy Young honor as well as the NL MVP. But he was never the same, with drinking diminishing his talent. He made the move to Los Angeles from Brooklyn and later played for Cincinnati and Cleveland before leaving in 1960.

He slid hard and played hard over 21 seasons and knew how to make an entrance. In his first game as manager, a player-manager for the Cleveland Indians, Robinson homered in the first inning against the Yankees.

He was baseball’s first African American manager. He would manage three other teams before becoming the first one for the Washington Nationals. He was a Hall of Famer with statues at three stadiums.

Robinson hit 586 home runs, was an MVP in two leagues (Cincinnati, Baltimore), a Rookie of the Year and a 12-time All-Star outfielder. He was a force on the first Orioles championship team in 1966. He hugged the plate, feeling he owned it, and said pitchers made him only more determined when knocking him down.

His peers — Willie Mays, Mickey Mantle, Hank Aaron — loomed large but Robinson held his own. Commissioner Rob Manfred called him a “trailblazer in every sense.” Brooks Robinson thought him the best he ever played with. Aaron said Robinson “did things on the field that people said could never be done.”

Maybe the highest compliment came from Bob Gibson, never one to overpraise: “As a rule, I’m reluctant to express admiration for hitters, but I make an exception for Frank Robinson.”

The 200th pick in the 1956 draft out of Alabama worked out nicely for the Packers. Never more so than on that Arctic day in 1967 at Lambeau Field when Starr sent Green Bay past the Dallas Cowboys 21-17 in an NFL title game whose mystique only grew with the years.

The Packers trailed by three with 5 five minutes left. Starr didn’t miss a pass in getting Green Bay to the Dallas 3. On the sideline, Starr and coach Vince Lombardi talked. Starr didn’t trust the footing and wanted to run a sneak. Jerry Kramer led the blocking, Starr plunged into the end zone with 16 seconds to go and the “Ice Bowl” legend was born.

“We all have the capacity to focus and to concentrate to a unique degree when we’re called upon to do it,” Starr said decades later. “That’s exactly what I did that day.”

Starr led Green Bay to five NFL titles. He was the MVP in 1966 and the MVP of the first two Super Bowls. (Two teammates on those mighty Packers teams also died in 2019: offensive lineman Forrest Gregg and backup quarterback Zeke Bratkowski.)

Starr later coached the Packers for nine years, winning not even half his games. His legacy was elsewhere. Said John Elway, a fellow Hall of Famer: “He set a tremendous example for all QBs to emulate.”

Running, always running. It started as a boy in his Ohio coal-mining town. Havlicek ran wherever he went. The story goes that a standard X-ray machine could not take the full measure of his lungs.

He ran at Ohio State, where he played with Jerry Lucas and won a national title in 1960. And he ran with the Boston Celtics, playing first under Red Auerbach and with Bill Russell and Bob Cousy and later for another era of championship teams with Dave Cowens and Jo Jo White.

Havlicek played 16 seasons, a lean 6-foot-5 swingman. He was nicknamed Hondo for his resemblance to a John Wayne movie character by that name. Basketball’s greatest sixth man eventually became a starter because his team could not afford to keep him on the bench.

He won eight titles, never losing in the Finals. He was a 13-time All-Star, a Hall of Famer. For Russell, he was the “best all-around player he ever saw.” Bill Bradley, the Knick with whom he waged fierce battles, called him the “quintessential Celtic.”

Hondo was true grit. In the 1973 Eastern Conference finals, his shooting shoulder separated, he played with his left hand. In 1976, he made one of great baskets in NBA Finals history, a leaning bank shot in the second of three overtimes against Phoenix.

But the steal defined him. In Game 7 of the 1965 Eastern finals, the Celtics led the 76ers by a point with five seconds left. Philadelphia had the ball but Hal Greer struggled with the inbound. Havlicek timed the pass perfectly, tipping the ball to Sam Jones as the clock ran out. Radio announcer Johnny Most hollered what are now sacred words in Celtic lore: “Havlicek stole the ball!

Elsewhere across sports, the Detroit Red Wings mourned giants in Red Kelly and Ted Lindsay. Kelly played 20 seasons, winning eight Stanley Cups for Detroit and Toronto, doing so with the Maple Leafs while a member of Parliament. NHL Commissioner Gary Bettman called him the “ultimate hockey renaissance man.” … Lindsay, knowing as bruising “Terrible Ted,” played on four Stanley Cup winners in the 1950s. He was a building block of the NHL players’ union. And should fans wonder about the origin of players circling the rink hoisting the Stanley Cup, they need look no further than Lindsay.

American sports took a hit with the death of Junior Johnson, the moonshine runner-turned-driver and owner who was one of stock-car racing's best. He was depicted by author Tom Wolfe as “The Last American Hero” and was an original member of the NASCAR Hall of Fame. Auto racing also is without Niki Lauda, who won two of his three Formula One world titles after a ghastly crash.

Baseball was shaken by the summer death of Tyler Skaggs. The 27-year-old Los Angeles Angels pitcher was found unresponsive in his Texas hotel room after a drug overdose, the legal implications still unclear. … Bill Buckner, forever remembered for the roller that trickled through his legs at first base during Game 6 of the Red Sox-Mets World Series in 1986, was a batting champ with more than 2,700 hits over 22 years. … Jim Bouton, a bulldog on the mound for the championship Yankee teams of the 1960s, threw back the curtain on baseball’s culture with his book “Ball Four.” … Pumpsie Green was the first African American on the Red Sox, baseball’s last segregated holdout. … Bob Friend pitched more innings than anyone in Pirates history and starred on their 1960 title team. … Mel Stottlemyre was a onetime Yankee ace and astute pitching coach for both New York clubs. … Julia Ruth Stevens, the adopted daughter of Babe Ruth and keeper of his legacy, was 102.

Basketball is now without Al Bianchi, the ex-76er and longtime NBA coach and executive. He worked as an assistant for the Suns’ John MacLeod, the coach of three NBA teams who also died this year. … Tom Nissalke was a basketball lifer and Coach of the Year in the NBA and ABA. … Wat Misaka, a point guard of Japanese descent, led Utah to NCAA and NIT titles in the 1940s before becoming the NBA’s first non-white player.

Football said goodbye to two mainstays from the NFL's only unbeaten team, the 1972 Miami Dolphins: undersized middle linebacker Nick Buoniconti and superb guard Bob Kuechenberg. ... The Raiders also lost two of their own: Willie Brown, the cornerback who popularized the bump-and-run defense; and Cliff Branch, the receiver who won three championships with them. … Gino Marchetti won two titles with the Baltimore Colts and was one of the NFL’s great defensive ends. ... Johnny “Lam” Jones was an Olympic gold medalist sprinter with the Jets and Cowboys. … The game lost two Heisman Trophy winners in Navy’s Joe Bellino and Ohio State’s Hopalong Cassady. ... Two NFL owners (Denver’s Pat Bowlen, Arizona’s Bill Bidwill) died as did Barron Hilton, the Chargers' first owner who helped bring about the NFL-AFL merger. … John Ralston guided Stanford to Rose Bowl victories in 1971 and ’72 before coaching the Broncos. … Walt Michaels coached the Jets for six years, leading them to the AFC championship game. … Keith Lincoln was a star running back on the Chargers’ 1963 AFL title team. … Coach Hayden Fry restored some life to Iowa football. ... Charles Rogers, one of the nation’s top receivers when at Michigan State, died at 38.

Soccer is diminished without English goalkeeper Gordan Banks, whose astonishing save on a header by Pele at the 1970 World Cup the Brazilian likened to a “salmon climbing up a falls.” … In golf, Gene Littler, his swing a piece of beauty, won the U.S. Open in 1961. ... Horse racing's Marylou Whitney was a prodigious thoroughbred breeder who rescued Saratoga in the 1970s.

In tennis, Australia’s Peter McNamara formed one of the best doubles teams with Paul McNamee in the 1980s and was once ranked No. 7 in singles. … Finland’s Matti Nykanen was one of ski jumping’s finest, a four-time Olympic champion. … Jack Burton Carpenter, the soul and visionary of snowboarding, helped make the sport an Olympic showpiece.

Gone from track and field is Harrison Dillard, the only Olympic runner to win gold in sprints and high hurdles and at 96 had been the oldest living U.S. Olympic champion. … New Zealand’s Peter Snell, who twice held the world mile record, was a three-time Olympic champ. … Rosie Ruiz, the infamous course cutter, was stripped of her fraudulent victory at the 1980 Boston Marathon. … And Paralympian medalist Marieke Vervoort, in relentless pain from incurable spinal disease, legally took her life in her native Belgium. She was 40 and shared a glass of sparkling wine on her last night.

The laughter in the room quieted with the exit of Dan Jenkins, a sports writer and best-selling author who knew his way around a golf course, a saloon and a keyboard. He had little patience for those blowing smoke. On his induction into the World Golf Hall of Fame, Jenkins listened as all his honors were read. Finally, he had his turn.

“You left out my cure for polio,” he said.