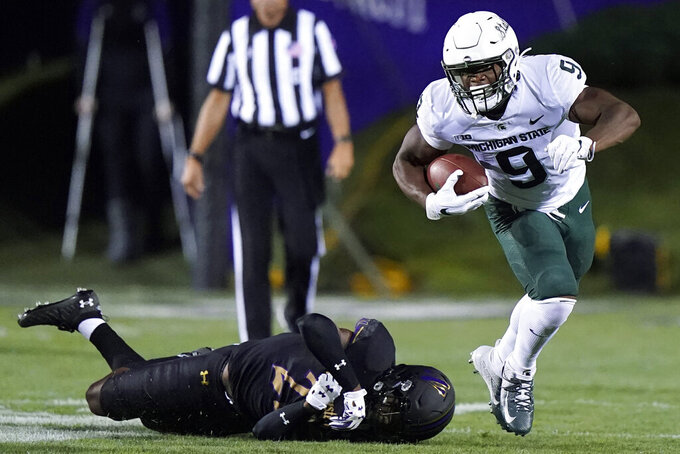 Michigan State running back Kenneth Walker III runs past Northwestern defensive back Bryce Jackson on the way to a touchdown during the first half of an NCAA college football game in Evanston, Ill., Friday, Sept. 3, 2021. (AP Photo/Nam Y. Huh)

The move to Michigan State has been a career booster for Kenneth Walker III, who leads the nation in rushing through his first three games with the Spartans.

Walker has had his two highest rushing totals as a collegian since transferring from Wake Forest in January. He's averaging 164.3 yards per game after running for 172 yards on 27 carries in the Spartans’ 38-17 win at Miami on Saturday.

The 5-foot-10, 210-pound junior generated 114 of his yards after contact and forced 20 missed tackles against the Hurricanes, according to Pro Football Focus.

Brennan Armstrong of Virginia is first in passing yards, averaging 432.7 per game after throwing for a national season-high 554 in a loss to North Carolina.

Deven Thompkins of Utah State is first in receiving yards with 151.3 per game.

Jaylen Warren of Oklahoma State had the only other 200-yard game of the weekend, going for 218 on 32 carries against Boise State. The transfer from Utah State entered the game with 46 yards on 20 carries.

Minnesota turned in its best defensive performance in at least two decades when it held Colorado to 63 total yards and minus-19 rushing yards in a 30-0 road win.

The Gophers had not held an opponent under 100 total yards or under zero on the ground since at least 2000, according to College Football Reference.

No team had given up so few total yards against an FBS opponent since TCU held Kansas to 21 in 2017.

Alabama's 31-29 win over Florida continued some impressive streaks for the Crimson Tide. With eight straight wins over the Gators, Alabama tied its record for the second-longest winning streak by any team against Florida. The Crimson Tide last accomplished that feat from 1964-86.

Alabama also won its 32nd straight against an SEC Eastern Division opponent. 'Bama has won 43 straight games when scoring a touchdown on its first offensive series.

Liberty quarterback Malik Willis ran for 100 yards in the first quarter against Old Dominion, making him the first Flames player since 2003 with a triple-digit rushing total after an opening quarter.

San Diego State’s 33-31 win over Utah in three overtimes gave the Aztecs a 7-2 record against the Pac-12 since 2016. The Aztecs’ 3-0 start includes two wins over Power Five opponents (Arizona last week). They also had two wins against the Power Five (Arizona State, Stanford) in 2017.