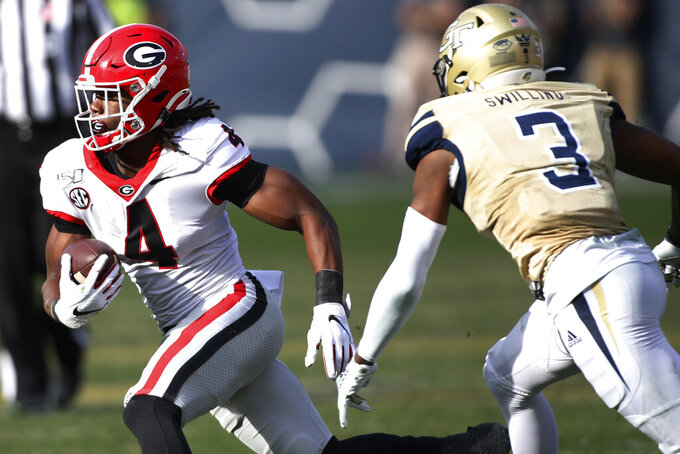 Georgia running back James Cook (4) moves the ball passed Georgia Tech defensive back Tre Swilling (3) in the second half of an NCAA football game between Georgia and Georgia Tech on Saturday, Nov. 30, 2019, in Atlanta. Georgia won 52-7. (Joshua L. Jones/Athens Banner-Herald via AP)

LSU will have plenty of fans on the campuses of Oklahoma, Baylor and perhaps Utah this week.

If No. 4 Georgia (No. 4 CFP) upsets the top-ranked Tigers (No. 2 CFP) in the Southeastern Conference championship game Saturday in Atlanta, both are expected to make the four-team College Football Playoff field. That likely would knock out the Big 12 champion and Pac-12 champion, unless something unexpected occurs, such as No. 3 Clemson (No. 3 CFP) losing to No. 22 Virginia (a 28-point underdog) in the Atlantic Coast Conference championship game.

But if LSU wins as expected, Georgia gets knocked out of playoff competition. That spot instead likely would go to No. 5 Utah (No. 5 CFP) or the winner of Saturday’s Big 12 championship game between No. 6 Oklahoma (No. 6 CFP) and No. 8 Baylor (No. 7 CFP). Before Utah can worry about the LSU-Georgia result, the Utes must beat No. 13 Oregon (No. 13 CFP) in the Pac-12 championship game Friday night.

Here’s a rundown of things to watch as the conference championship games take place this week.

LSU is a seven-point favorite in a game that features one of the nation’s most explosive offenses against one of the best defenses in the land.

Led by quarterback and Heisman Trophy favorite Joe Burrow, LSU ranks second among all Football Bowl Subdivision teams in points per game (48.7), yards per game (560.4) and yards per play (7.9).

Burrow seems to have such a commanding lead in this race that he probably will win the Heisman even if he doesn’t play particularly well this week.

But there’s still a bit of suspense over who might join him in New York. Plenty of those contenders will be playing this week, most notably in the Big Ten championship game between No. 2 Ohio State (No. 1 CFP) and No. 10 Wisconsin (No. 8 CFP).

Young has an FBS-leading 16 ½ sacks. Fields has thrown 37 touchdown passes with only one interception while directing the offense of the nation’s highest-scoring team. Taylor has rushed for 1,761 yards to rank second nationally, while Dobbins is fourth with 1,657 yards.

Another player to watch is Clemson quarterback Trevor Lawrence.

Although a relatively slow start pretty much knocked him out of the Heisman conversation, Lawrence has been on a tear lately. Over his last five games, Lawrence has completed 76 percent of his passes with 16 touchdowns and no interceptions. A big performance against Virginia could send him to New York.

29: Number of takeaways by Florida Atlantic (10 fumble recovers, 19 interceptions). The Owls lead all FBS teams in that category.

68: Taylor needs that many yards in the Big Ten championship game to reach 6,000 career yards rushing. He’d become the seventh player in FBS history to reach that plateau and would be the first to do it in only three seasons.

While the Power Five conference championship games and their playoff implications are dominating discussions this week, the Group of Five leagues also are holding championships. Here’s a rundown of each Group of Five matchup.

Miami (Ohio) (7-5, 6-2 Mid-American) vs. Central Michigan (8-4, 6-2): Former Florida coach Jim McElwain has made a successful comeback in his debut season at Central Michigan. The Chippewas are playing for the Mid-American Conference title one year after going 1-11.