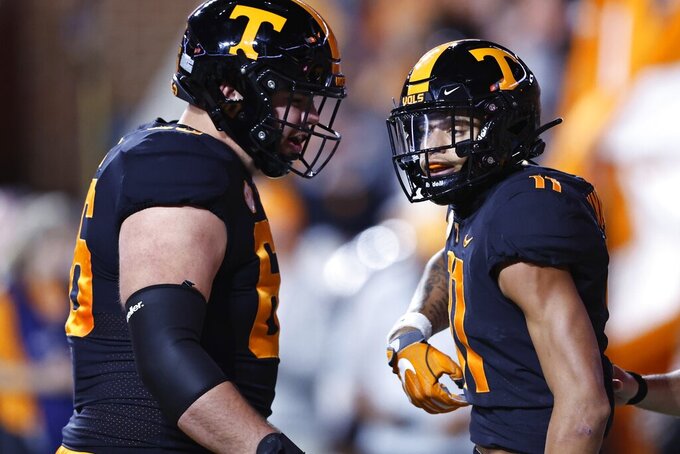 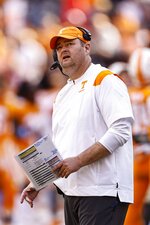 “I have certainly heard from people about what an idiot I am that I didn’t recruit Jalin Hyatt,” said Beamer, the second-year coach who was an Oklahoma assistant when Hyatt was a standout for Dutch Fork High Schoo, about 20 miles from the Gamecocks' campus.

Hyatt and the Vols (9-1, 5-1 Southeastern Conference, No. 5 CFP ) will look to crank things up in front hometown friends and family at South Carolina (6-4, 3-4) on Saturday night.

Blame Lincoln Riley, then Oklahoma coach, for not recruiting Hyatt “and whoever else was here,” Beamer continued. “Certainly, he is a fantastic player. What a year he is having.”

"Yeah, for sure,” Tennessee quarterback Hendon Hooker said. “You know, anytime you go home to play, it’s a great feeling.”

And maybe a little bittersweet.

Hyatt was among the best prep players in the Palmetto State. He even showed out at Williams-Brice Stadium, most notably with three touchdowns including one in OT as Dutch Fork won the 2019 state title.

But he wasn't pursued by his hometown school in part because the past staff, led by Will Muschamp, wondered if the 6-foot, 185-pound junior was a little too slight for the rugged SEC.

“You can see the intensity that he plays with when he catches the ball,” Hooker said. “He’s playing very physical right now,”

“It's definitely going to bring some excitement,” Smith said.

Tennessee quarterback Hendon Hooker is among five finalists for the Johnny Unitas Golden Arm Award this season. Hooker is the first Volunteers' passer to make the final cut since Peyton Manning did it in 1997. Hooker hopes to make it 2-for-2 for Tennessee as Manning won the honor.

WHO'S RUNNING THE BALL

South Carolina won four straight games midseason on the strength of a strong run game led by tailbacks MarShawn Lloyd and Christian Beal-Smith. But Lloyd has missed the past two games with a thigh bruise and Beal Smith missed the loss at Florida last week with a lower body injury. The two have combined for 751 yards rushing and 11 touchdowns. Beamer said both are hopeful to play this week, but are limited at practice.

With the win well in hand last week against Missouri, Tennessee opted to go for a final touchdown with with 36 seconds to play in the 66-24 victory. Vols coach Josh Heupel thought about taking a knee, but said his backups were mostly in the game.

“I don’t know what the right thing to do is in that moment at the end of the day, but our guys continued to play football,” Heupel said.

South Carolina backup runner Juju McDowell was asked what it's like play in the Gamecocks home stadium that will be sold out for the sixth time in seven home games.

“Imagine you're 9 years old walking down the street and someone gives you two tons of Reese's (Peanut Butter Cups),” McDowell said. “That feeling right there is exactly what we feel like every time there.”

STRIKE UP THE BAND

Tennessee's Hooker had a career moment when he climbed the ladder to direct “Rocky Top” after the Missouri win last week. Hooker was walking over to sing with his teammates when the band's director asked him if he'd like to lead the school's famed song.

“I was kind of scared, though, getting on the ladder with my cleats on,” Hooker said. “I was like. ‘I hope I don’t fall.'"