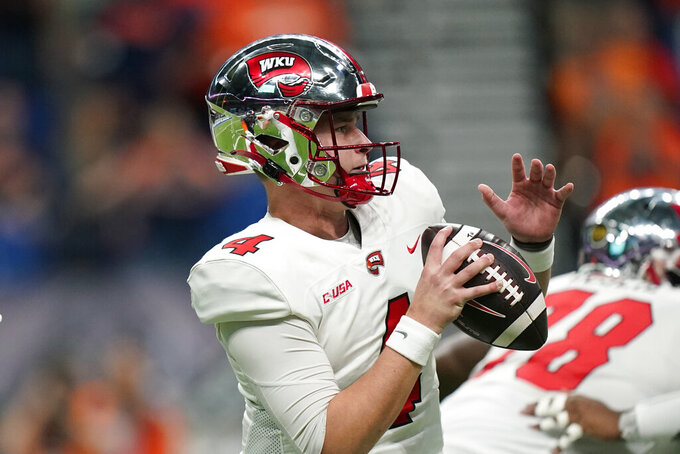 Western Kentucky quarterback Bailey Zappe (4) looks to pass against UTSA during the first half of an NCAA college football game in the Conference USA Championship, Friday, Dec. 3, 2021, in San Antonio. (AP Photo/Eric Gay)

IRVING, Texas (AP) — Western Kentucky quarterback Bailey Zappe was named MVP of Conference USA on Wednesday after a vote of the 14 league coaches that also tabbed UTSA running back Sincere McCormick as offensive player of the year and Hilltoppers defensive end DeAngelo Malone as the top defender.

Zappe, a transfer from Houston Baptist, has thrown a conference-record 56 touchdowns in his only season with the Hilltoppers. He is also the national leader with 5,570 yards passing, and is within reach of the FBS single-season records of 5,833 yards and 56 TDs going into the Boca Raton Bowl against Appalachian State.

McCormick is the league's offensive player of the year for the second season in a row. He has 1,479 yards rushing with 15 TDs, both school records for C-USA champion UTSA.

Malone is also a two-time player of the year, having also been the league's top defender in 2019. Malone tied for the C-USA lead with 16 1/2 tackles for loss and ranked second with eight sacks. He has 88 tackles and four forced fumbles.