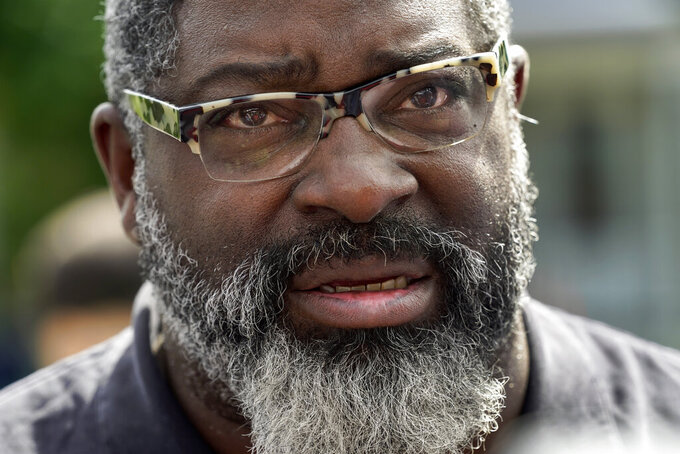 Two former University of Michigan football stars who stand to receive as much as $500,000 each through the school's sexual abuse settlement with more than 1,000 students say the per-victim payouts should be much higher, pointing to a similar case at rival Michigan State.

Dwight Hicks and Jon Vaughn, both former NFL players, told The Associated Press that the $490 million settlement the Ann Arbor school announced this week is another example of Black victims receiving less than white victims in big-money payouts. The majority of the claimants in the settlement are Black men, said John Manly, an attorney involved in the case.

Although the victims of the school's former sports doctor Robert Anderson are expected to receive between $400,000 and $500,000, the victims of Larry Nassar — who sexually assaulted gymnasts at Michigan State University — averaged $1.2 million in payouts.

"The differences: One, they were women. Two, they were white,” said Hicks, 65, who attended Michigan from 1974-78 and spent eight seasons in the NFL with Indianapolis and San Francisco.

He said the fact that there was a smaller pool of victims, about 300, in Michigan State's $500 million settlement in 2018, "I don't feel we should get less. This is the damage that was done to us and perpetrated on us as Black men.”

“At the end of the day, none of this is fair,” Vaughn told The Associated Press on Friday.

A 2018 report says insurance companies and courts rely on testimony of economic experts’ calculation of damages using wage tables, and that data often is based on the race, ethnicity and gender of the person filing the lawsuit, according to the Lawyers’ Committee for Civil Rights Under Law.

Blacks, Latinos and Hispanics and women of all races typically earn less than white men, meaning damages awarded often are less than what white men would receive, the report said.

Law firms involved in the Anderson litigation have not shared the racial breakdown of their clients, said attorney Jamie White, who added that about 93% of the 78 or so Anderson clients his firm represents are Black.

Anderson, in his roles as director of the university’s Health Service and a physician for football and other athletic teams, has been accused by former students and student-athletes of molesting them during routine physicals or other visits. The abuse occurred throughout Anderson’s 37-year career at the university, a law firm hired by the school said in a report released last spring.

Nassar, who also worked as a sports doctor for USA Gymnastics, pleaded guilty in 2018 to molesting women and girls under the guise of treatment. He also was caught with child pornography. He is serving three prison sentences that will likely keep him locked up for life.

None of the 332 initial individuals represented by his firm in the Nassar case were Black, White said, adding that all were white and only one was a man.

“It’s not unheard of that men are discounted, so to speak, when it comes to these sorts of cases,” he said. “We have to appreciate the University of Michigan coming forward and doing what they did. There were a lot of claimants. The numbers are difficult, but on its face it is what it is. We’ve got $1.2 million for young, Caucasian women and we have an average of $460,000 for the majority of these African American men.”

“There’s a myriad of reasons or facts in this case that are different than Nassar," he said. "I should have never had my first prostate exam at 18 and should not have had 49 more.”

What each will receive in the settlement is not the major reason why they spoke up about Anderson, White added.

“They’re older and many of them are accomplished,” he said. “This was not about money for the vast majority of them. They really just felt they needed to voice-up and have some accountability.”

But — as student athletes — they were younger and had much more at stake, White said.

White said the money from the University of Michigan settlement will not be distributed equally among Anderson’s victims and that there is an allocation process that will be overseen by a retired federal judge.

A spokesman for the University of Michigan told the AP Friday that the school and attorneys hired by the Anderson claimants agreed “this was a fair settlement" and that the university will have no role in how the money is divided.