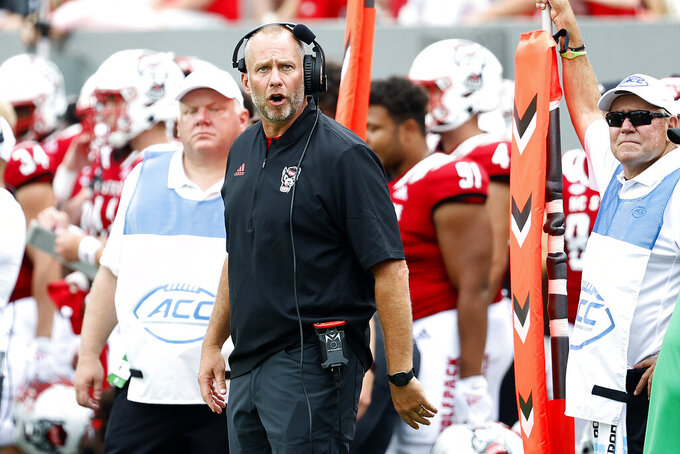 Penalties happen, often in abundance, early in the season when new players are getting their first chance to make an impression. They are often costly.

How Atlantic Coast Conference coaches deal with them is another matter. Team film review, position meetings and one-on-one chats all come into play as coaching staffs try to impress on their players the importance of avoidance.

Virginia Tech, North Carolina, Louisville and Syracuse have all had more penalties, or at least as many, in one game as five league teams have through two games. While it hasn’t always affected the outcome -- North Carolina, after all, is 3-0 and the Orange 2-0 -- there’s an instance where it led to a big upset, and others where it let one team hang around far longer than expected.

The Hokies had 1 5 penalties for 106 yards in their 20-17 loss at Old Dominion to open the season, and the flags included five pass interference calls. The last was a 38-yarder against Dorian Strong that set the Monarchs up at the Virginia Tech 1 with about a minute left. ODU scored with 33 seconds left.

“I thought we were pressing in Week One. I don’t know if I’ve said that to you guys, but I’ve said it to the team and the staff. You know, just pressing to where it was unhealthy, and I think that was at the root of some of those,” he said. “And, obviously, we emphasized that this week."

Week Two? Five penalties for 25 yards in a 27-10 win against Boston College.

The Tar Heels were whistled 12 times for 130 yards in their 63-61 victory against Appalachian State, a UNC victory that was only secured when the Mountaineers’ two-point try failed with 31 seconds remaining.

S yracuse beat Louisville 31-7 in the opener for both teams. The Orange won despite 18 penalties for 107 yards, then had just three for 15 yards in their victory against Connecticut.

“Coach (Dino) Babers will call out the guys who had the penalties and they always know they’re going to be in the penalty box,” Jones said. “During our first practice during the week they’ll do a 2- or 3-minute discipline station, something like that, and then they’re right back in practice. It’s just something to remind them that penalties are serious and we should take them as serious.”

Like all coaches, No. 16 North Carolina State’s Dave Doeren doesn’t agree with every flag thrown against his team, costly or not, but he highlighted a few legit calls that could have hurt after the Wolfpack beat Charleston Southern 55-3.

“We had two offsides on the offense. So here’s the two players. Their names are up there on the power point," he said of the team's film review session. “Both of these penalties were in the red zone. That can have a negative effect on scoring. You took us from first and 10 to first and 15. We had another one on a fourth-and-4 on a punt where a guy false started. We actually got them to jump offsides and had we not flinched, when we would have got a first down."

His quibbles, it seems, come most often with what he calls “combat penalties,” with two players engaged. He spends little time on calls he disagrees with, surmising that the official just saw it differently, but points out the ones where technique was the problem. He also highlights calls not made, like when a Wolfpack defensive player picked up an opponent and slammed him down.

Film review, he said, is “not just celebrating that we got pancakes and handing out bottles of syrup, but also teaching ... so that we can learn and get better as we move forward."

First-year Virginia coach Tony Elliott leaves the punishment for penalties up to position coaches, and Duke's Mike Elko, another first-year coach, said what he terms “competitive penalties” are harder to address than procedural ones.