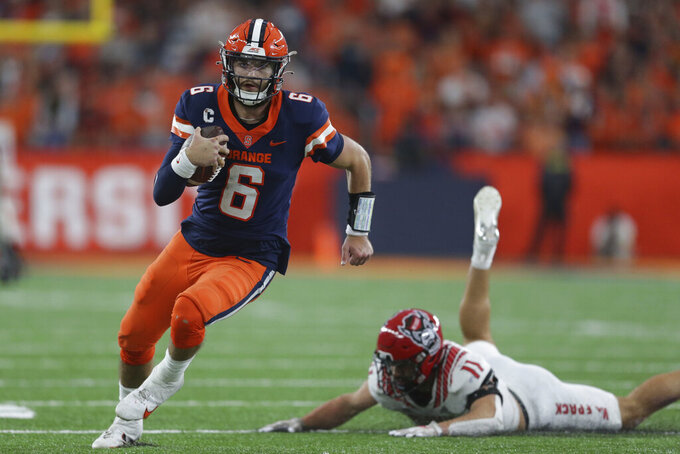 Things to watch in the Atlantic Coast Conference in Week 11:

Clemson has already clinched the Atlantic Division and the Tar Heels have a comfortable lead over Duke and Georgia Tech in the Coastal. A win over the Demon Deacons, who are coming off their second straight loss — a 30-21 setback at N.C. State that knocked them from the AP Top 25 — or losses by Georgia Tech and Duke will clinch the division for UNC. The Tar Heels, who handed Wake Forest its first loss last season, 58-55, have won five straight road games, tied with undefeated No. 3 Michigan for the second-longest active streak in the nation. Top-ranked and unbeaten Georgia has won nine straight on the road.

It's the last conference game for the Seminoles, who have won two straight since a three-game skid against Wake Forest, N.C. State and Clemson. The Orange have dropped three in a row to spoil a perfect start but are 5-1 at home. A win would match the program record in the Dome since it opened in 1980. The game figures to matter to both teams in terms of bowl positioning.

The Eagles are 19 1/2-point underdogs, according to FanDuel SportsBook. Redshirt freshman Emmett Morehead made his first career start last week against Duke and became the first BC quarterback to throw four touchdowns in a debut, albeit a 38-31 loss. Morehead was 27-for-45 passing for 330 yards in the 38-21 loss and is likely to get the nod again over injured Phil Jurkovec. A repeat performance won't be easy. The Wolfpack lead the ACC in scoring defense (17.8), rushing defense, passing efficiency defense, and interceptions (14).

North Carolina State's Christopher Dunn ranks second in ACC history with 87 career field goals. That's just one shy of Florida State’s Dustin Hopkins, who set the record from 2009-12. Dunn also has not missed an extra point in his career, converting 194 attempts. Only two other ACC kickers who have attempted at least 190 extra-point kicks have finished their careers without a miss — Florida State's Roberto Aguayo made 198 from 2013-15 and Nick Sciba of Wake Forest converted 193 from 2018-21. ... Clemson place-kicker B.T. Potter is tied with former Tigers kicker Greg Huegel (2015-18) for the ACC career record with 218 made extra points.