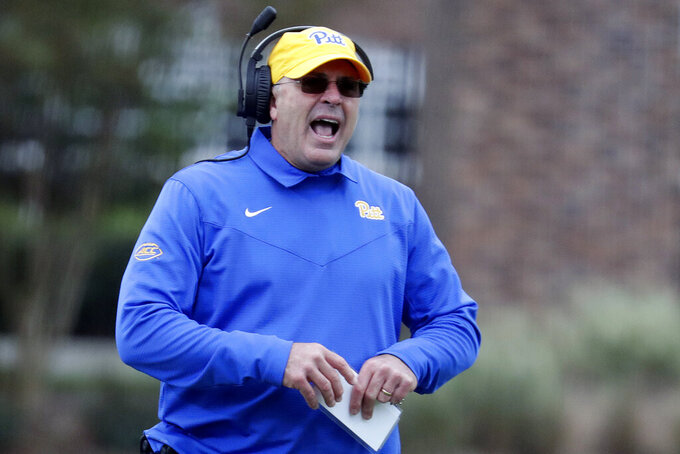 The Atlantic Coast Conference divisional races are far from decided and several schools still have a shot at winning the league crown.

“This is like what you train for and all season, you want to be in these positions," Alonso said. “We put our team in a good enough position to have our goals in reach."

Virginia is not alone.

Wake Forest remains the only unbeaten team in the Atlantic Division, but after allowing 330 rushing yards in its 58-55 loss to North Carolina, a Coastal Division team, the No. 13 Demon Deacons may have exposed the blueprint to beat them.

“Big game ahead of us – I think everyone knows that,” Wake Forest offensive lineman Sean Maginn said this week.

The No. 21 Wolfpack, 27-21 winners in double-overtime against Clemson earlier in the season, play in Winston-Salem on Saturday and could gain a tiebreaker advantage over both Wake Forest and the Tigers with a win. N.C. State closes against vastly improved Syracuse, which has won two in a row, and longtime rival North Carolina.

“We need to focus on just getting better and staying in the moment as a team and not allowing what we want at the end of the season … to get in the way of how we get to that place,” Wolfpack coach Dave Doeren said.

The Tigers, members of the last six four-team playoffs, likely won't make it seven straight but haven't written off another trip to the ACC championship game.

“We want to finish strong, because that’s all we can do. Can’t worry about dead yesterdays or unborn tomorrows. You can only worry about right now,” Clemson tight end Davis Allen said, "and that’s what we’re trying to do.”

In the Coastal Division, No. 25 Pittsburgh (7-2, 4-1) can win it simply by winning out, but the Panthers' path isn't easy. They host North Carolina (5-4, 3-3) on Thursday night before facing Virginia, also at home, then visiting Syracuse.

Pitt leads the nation with an average of 45 points, but the Tar Heels' 58-55 victory caught coach Pat Narduzzi's eye. North Carolina has been up and down all season but has scored 58 or more three times.

Virginia (6-3, 4-2) will play another nonconference game when it hosts No. 7 Notre Dame on Saturday night, then has its fate in its hands at Pittsburgh and at home against Virginia Tech (4-5, 2-3), which has struggled this year but also has beaten the Cavaliers in 16 of the past 17 meetings.

Cavaliers coach Bronco Mendenhall said he doesn't expect to hold injured players out against the Fighting Irish with an eye toward the pivotal ACC finish, but he hinted a few that are ailing and well below 100% could be spared.

“The only ones, if there is anything that could tie into that, are just players that they might be back and might be at whatever percentage versus a couple more days, and they could be at full percentage versus risk of not having them at all for the next couple weeks," he said, adding that it could only be “one or two.”

Mendenhall, for example, had no status report on quarterback Brennan Armstrong, who left a 66-49 loss at BYU with a rib injury, despite the Cavaliers being off last week in what he called a priority healing time.

“I probably won’t have an update until the ball is kicked off and we all look out there and see who our quarterback is,” Mendenhall said coyly on Monday.

Miami (5-4, 3-2), meanwhile, has won three straight, including a 38-34 victory at Pittsburgh, and finishes at Florida State, at home against fading Virginia Tech and at Duke.

Syracuse also could figure prominently in the mix, despite not being in contention. The Orange (5-4, 2-3), winners of two straight, go on the road to face N.C. State on Nov. 20 and close at home against Pitt on Nov. 27.

The emergence of dual-threat quarterback Garrett Shrader (20 touchdowns, including 13 rushing) combined with ACC rushing leader Sean Tucker (140.8 yards per game, 13 TDs) have made the Orange a dangerous late-season foe.

It all adds up to a seemingly fitting way to cap off this unpredictable ACC season.

This story has been corrected to show that North Carolina is 3-3, not 4-3, in the Atlantic Coast Conference.