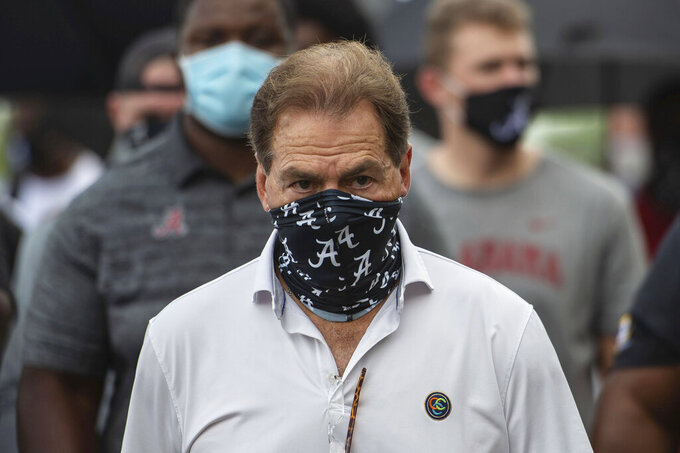 TUSCALOOSA, Ala. (AP) — Alabama coach Nick Saban has tested negative in a follow-up test for COVID-19, leaving open the possibility of a return to the sideline for the Georgia game.

Alabama head athletic trainer Jeff Allen said Saban's test came back negative on Thursday. If he tests negative again Friday and Saturday, Saban would be allowed on the sidelines for the second-ranked Crimson Tide's Southeastern Conference showdown with No. 3 Georgia Saturday night.

Allen said the PCR test Thursday was conducted by the SEC-appointed lab. He said Wednesday's initial positive result came from an outside lab Alabama has “used to supplement the SEC mandated testing.”

The PCR test is considered the preferred method of testing for COVID-19 as identified by the NCAA’s Resocialization of College Sports Guidelines.

“He will continue to remain in isolation and receive daily PCR tests,” Allen said. "Should he have three negative PCR tests through the SEC appointed lab, each 24 hours apart, the initial test would be considered a false positive pursuant to SEC protocols and he would be allowed to return.”

Allen said Saban has remained asymptomatic and hasn't had a fever. But unless Saban tests negative again Friday and Saturday, he will remain sidelined for the game against the Bulldogs.

Saban and athletic director Greg Byrne tested positive on Wednesday. The 68-year-old coach has continued to work from home and even been able to relay messages during practice via team managers.