Back in the rankings, No. 18 Washington hosts Stanford 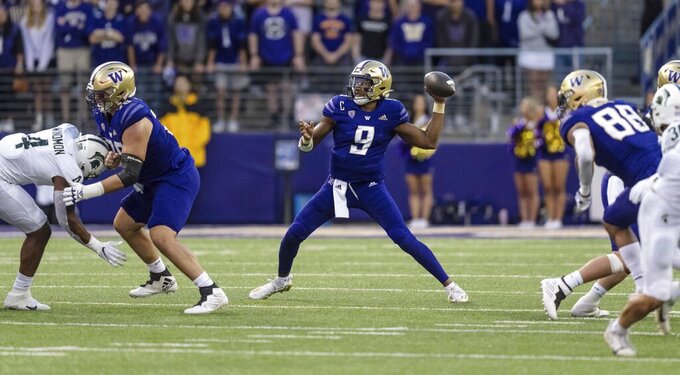 Line: Washington by 14, according to FanDuel Sportsbook.

Washington was welcomed back to The AP Top 25 after toppling Michigan State 39-28 last week, a game that wasn’t as close as the final score. Quarterback Michael Penix Jr. threw for nearly 400 yards and his 10 touchdown passes in three games is second in the country. Stanford has the benefit of have an extra week to prepare following its Week 2 loss at home to Southern California and for the second straight season will face Washington following its bye.

Stanford’s run game vs. Washington’s defensive front. The Cardinal will be without top running back E.J. Smith due to an undisclosed injury. The running duties will fall to Casey Filkins and Caleb Robinson, but the task won’t be easy. Washington’s run defense was superb last week against Michigan State, holding the Spartans’ running back duo of Jalen Burger and Jerek Broussard to a combined 30 yards rushing on 17 carries.

Stanford: QB Tanner McKee. With Smith out, the Cardinal need a big game from McKee and a better performance than last against Washington when he threw a pair of interceptions. McKee threw two picks and completed just 57% of his passes in the loss to USC.

Washington: WR Ja’Lynn Polk has been talked about as a possible breakout player for quite a while. It finally happened last week against the Spartans when he had six catches for 153 yards and three touchdowns. He’s part of a trio of standout wide receivers for the Huskies that includes Jalen McMillan and Rome Odunze.

Penix was named the Pac-12 offensive player of the week after throwing for 397 yards and four TDs against Michigan State. Penix has thrown for at least 330 yards in all three game this season. ... Stanford has defeated a team ranked in the top 20 on the road in eight of the 11 seasons David Shaw has been in charge. ... Stanford had 33 first downs in the loss to USC, most in a game since 1997. ... Washington has won two of the past three meetings against Stanford in Seattle, but lost the last matchup at Husky Stadium in 2020.