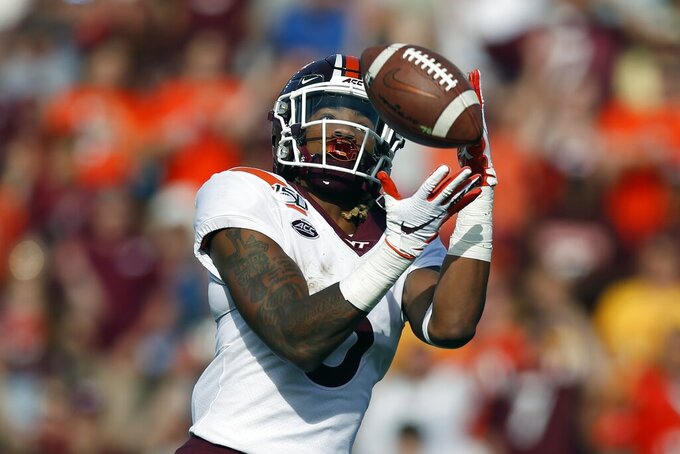 BOSTON (AP) — No cupcakes, no local rivals to open this season. Boston College jumped right into it with a victory over an Atlantic Coast Conference opponent.

Anthony Brown threw two touchdown passes and ran for another to lead the Eagles to a 35-28 victory over Virginia Tech Saturday in the schools' opener.

AJ Dillon and David Bailey each had a scoring run for BC, which posted a win over the Hokies for the second straight year. Kobay White (17 yards) and true freshman Zay Flowers (33-yarder) each had a TD catch.

"Winning the opener is extremely important. It validates your offseason work and it gives you positive momentum. But winning your opener against a highly-quality football team, I think you get better from that," BC coach Steve Addazio said. "You can go out, win an opener against a team that maybe you're stronger than, but I don't think that it sometimes helps you because two weeks in, three weeks in you can get shocked at the speed of the game."

Eagles defensive back Brandon Sebastian knew the importance of the victory.

"It means a lot, especially to the whole team," he said. "They're a tough ACC opponent every year."

Ryan Willis competed 29 of 47 passes for 344 yards with four TDs, but also was picked off three times for Virginia Tech, which finished last season with a losing record for the first time since 1992.

"It's tough for our guys to battle back, fight, scratch and claw all the way through and come up short," Virginia Tech coach Justin Fuente said. "Lord knows we made plenty of mistakes out there today."

Willis, who won the job in preseason camp, knows he's got to be better.

"I need to take care of the ball better," he said. "There's a couple reads I can make better."

It was tied 14-all before BC capitalized on a pair of turnovers, scoring two TDs in the final 6:02 of the first half.

Cornerback Tate Haynes forced Willis' fumble on a blitz and defensive end Marcus Valdez recovered at Virginia Tech's 17. Two plays later, Brown lofted a TD pass to White, who made an acrobatic catch along the left sideline for a score.

With just under 2 ½ minutes left in the half, Hezekiah Grimsley fumbled a punt that was recovered by BC's Nolan Borgersen at the Hokies' 28. Brown took off through the left side on an option play and went untouched for a score.

Willis hit tight end James Mitchell on slant pattern for a score, slicing it to 28-21 late in the third quarter.

Virginia Tech: The Hokies' defense was 106th in the nation against the run last season, allowing 210 yards per game on the ground. BC exploited them through the air with a handful of deep passes and unless the Hokies get the D shored up it will be a long final season - the 33rd - for defensive coordinator Bud Foster, who announced this will be his last year. They did hold BC to zero yards in the third quarter after 356 in the opening half.

"For whatever reason, we just played extremely tight as a defense," Foster said. "That wasn't the same group that practiced and how they performed. You saw how we played in the second half, it's how I was kind of hoping we'd play the entire game."

Boston College: Brown, a red-shirt junior, looked like the QB the Eagles have been hoping for, at times. His reads seemed better and his touch improved. But when the Hokies were making their comeback, he made a few bad decisions. If he becomes more consistent it would add a tough one-two punch with quality RB Dillon.

"It was a good day today," Brown said. "But there were still some inconsistencies here and there, I missed some throws. I got complacent a little bit."

Addazio made sure he had a chance to chat with Foster after the game.

"I just told him how much respect I have for him and that he's had a fabulous career," Addazio said.