Bye blues: No. 11 Miami looks to snap a trend at NC State 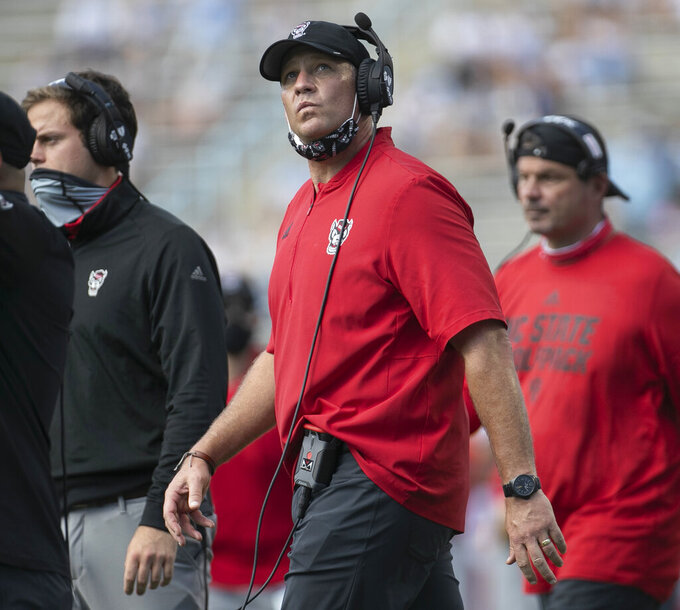 A week of rest is usually a good thing for a football team. In recent years, that has absolutely not been the case for the Miami Hurricanes.

Including its bowl appearance, Miami was 0-4 when it was coming off a bye week last season — and that has been a trend the Hurricanes have dealt with for a while. The 11th-ranked Hurricanes (5-1, 4-1 Atlantic Coast Conference) will be coming off a bye again Friday night when they head to Raleigh, North Carolina and visit N.C. State (4-2, 4-2).

The Hurricanes have dropped seven consecutive games since Sept. 23, 2017 when coming off a bye (or bowl-prep break), including their lone loss this season to No. 1 Clemson.

Last year’s bye weeks led to disasters. Miami fell behind 17-3 in the first 11 minutes to North Carolina and lost 28-25. The Hurricanes gave up three touchdowns in a 7 ½-minute span of the first quarter on the way to a 28-0 early deficit to Virginia Tech and lost 42-35. They got down 23-3 to FIU before falling 30-24. And in the bowl game against Louisiana Tech, Miami got blanked 14-0 in what became the only shutout loss of the 2019 FBS postseason.

“Yes, the records are there: we always lose after a bye week,” Miami receiver Mike Harley said. “But we just feel if we come out motivated, not worry about everything ... take it out to the game, we’ll just win. We’re just motivated.”

N.C. State is coming off a bye for the first time this season, after playing six consecutive weeks and winning four of those games to match its victory total from the entire 2019 season.

N.C. State needed last week’s open date to get healthy with numerous players banged up coming out of an Oct. 24 loss at rival North Carolina. The Wolfpack appeared to be on the rise with the improved play from quarterback Devin Leary, but he went down — likely for the season — to a broken leg in the Oct. 17 win against Duke.

Bailey Hockman started against the Tar Heels while true freshman Ben Finley also got extensive playing time in that one. Hockman is atop the depth chart for the Miami game.

“We just have to be smart with Ben,” Wolfpack coach Dave Doeren said. “At the same time, Bailey operates our offense really well. … I think if you’re going to do something like that, you’ve just got to be smart about the flow of the game and not let one kid get out of rhythm, because rhythm is a big part of playing that position.”

Here’s some of what to know about Friday’s game:

Miami has about a half-dozen players miss the Virginia game two weeks ago over coronavirus concerns and has seen more since quarantining because of either positive COVID-19 tests or potential exposure. The Hurricanes won’t reveal who is not available for Friday’s game until an hour before kickoff. “It’s a constant threat. You never feel good about it, but the guys for the most part, they try to be smart about it,” Diaz said.

This is a matchup of ACC “rivals” who have faced each other only once since 2012. This will be just the sixth time the Hurricanes and Wolfpack have met since Miami joined the ACC in 2004. The programs played in back-to-back seasons in 1944 and 1945, then again in 1981 and 1982. The Wolfpack are 1-3 in home games against Miami all-time.

If Wolfpack QB Ben Finley, as expected, plays in some sort of rotation with presumed starter Bailey Hockman, there could be a serious home-field advantage for N.C. State — especially if Finley connects with receiver Devin Carter. The Wolfpack’s home field? Carter-Finley Stadium.

N.C. State has turned the ball over seven times in its last two games. That matches the most the Wolfpack have had in any two-game span since they had nine giveaways combined on Oct. 27 and Nov. 3, 2012 — and is three more in total than the Wolfpack had in the first four games of this season.

Hurricanes QB D’Eriq King knows who needs to step up to get Miami’s rushing game going. He says he does. “Just getting myself involved early. Pulling a few will open up a lot of stuff. ... If I can be a little more aggressive that would help a lot of things out,” King said. Miami is averaging 2.8 yards per carry in its last three games.