Cavaliers look to end No. 7 Notre Dame's dominance of ACC 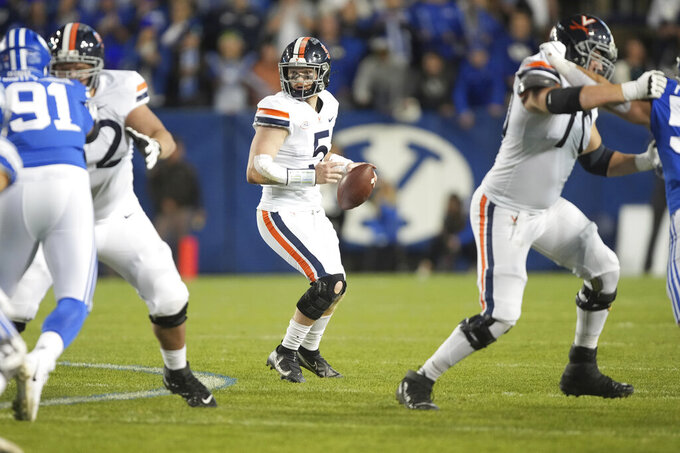 Notre Dame is hoping to rise from ninth in the College Football Playoff rankings to a spot in the top four with time running short.

On Saturday night in Charlottesville, Virginia, the No. 7 Fighting Irish face a Virginia team coming off a disappointing loss and looking to stay on track for the ACC’s Coastal Division title.

The Cavaliers have their work cut out for them.

Notre Dame (8-1) has won 22 consecutive regular-season games against schools from the Atlantic Coast Conference, including 10 straight on the road. The Cavaliers (6-3) are coming off a 66-49 loss at No. 14 BYU and then a bye week that was used to allow nicked-up players to rehab.

Virginia will play Pittsburgh and Virginia Tech to close out the regular season, and would win the division by winning both.

Quarterback Brennan Armstrong, who leads the nation in total offense with 425.3 yards per game, suffered a rib injury that knocked him out of the game at BYU. Coach Bronco Mendenhall has shared no update on his status.

"I probably won’t have an update until the ball is kicked off and we all look out there and see who our quarterback is,” Mendenhall said earlier this week.

The Fighting Irish are preparing for Armstrong, and the alternatives. Jay Woolfolk relieved Armstrong in Utah, but Keytaon Thompson, who was a quarterback at Mississippi State, also could be an option behind center. He plays several roles now: wide receiver, running back and some quarterback.

All four of Virginia's quarterback options are also effective runners.

Some other things to watch for when Notre Dame plays at Virginia:

Whether Armstrong plays or not, Mendenhall acknowledged this week that “one or two” players not at 100% who could be vital to their success at Pittsburgh and at home against the Hokies could watch from the sideline.

“The only ones ... are just players that they might be back and might be at whatever percentage versus a couple more days and they could be at full percentage versus risk of not having them at all for the next couple weeks,” he said.

Notre Dame also has been hit hard by injuries during its four-game winning streak. Junior All-America free safety Kyle Hamilton injured his right knee against Southern California Oct. 23 and is listed as doubtful. Graduate wide receiver Avery Davis tore an anterior cruciate ligament against Navy and will miss the rest of the season after surgery. Notre Dame was already thin with the losses of Joe Wilkins Jr. (torn ACL) and Lawrence Keys (transfer portal).

“It’s the Notre Dame culture – being a gritty, tough dude,” said White. “It’s my teammates who I want to be there for.”

Virginia allowed 699 yards in a 59-39 loss to North Carolina and 734 yards in the loss to BYU, but the defense-minded Mendenhall said it's not that bad. “So many things are correctable. The team sees that. I see that,” he said.

Since a 24-13 loss to Cincinnati, Notre Dame has gone with two quarterbacks — grad-transfer Jack Coan (Wisconsin) and true freshman Tyler Buchner. Buchner. Buchner sparked the Irish at Virginia Tech when he replaced an ineffective Coan early, but Coan returned and led two scoring drives in a 32-29 victory.

The length and height of a couple Virginia players is hard to miss and their size certainly hasn't escaped Notre Dame coach Brian Kelly.

“They’ve got a couple of basketball players playing tackle,” Kelly quipped, referring to Virginia's Ryan Swoboda (6-foot-10, 325 pounds) and Bobby Haskins (6-7, 295). Irish junior defensive tackle Jacob Lacey knows he and the defense will have their hands full trying to get into the backfield.

“We’ve faced some pretty good offensive lines before,” Lacey said. “It’s not going to change what we do.”