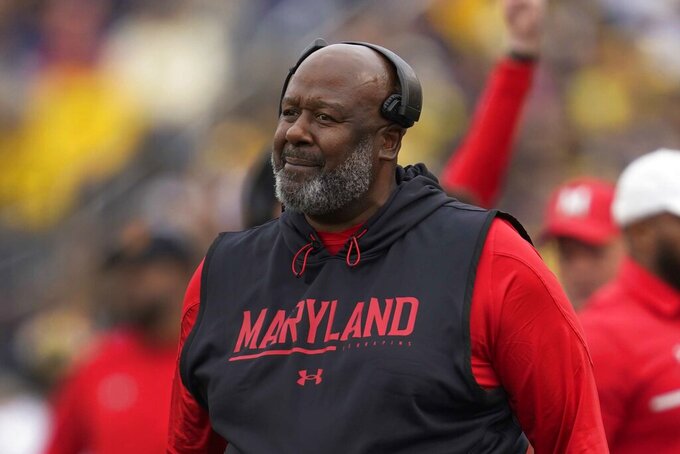 ANN ARBOR, Mich. (AP) — Blake Corum was eager to be a workhorse. The Michigan running back got his wish on Saturday and delivered a game-changing performance.

Corum rushed for a career-high 243 yards and two touchdowns and No. 4 Michigan topped Maryland 34-27 in the Big Ten opener for both teams.

Corum, who tied the school record with five rushing touchdowns against UConn a week earlier, had a career-high 30 carries. He became the first Michigan back to rush for 200 yards since Karan Higdon in 2017.

“My mindset, I feel like I was always able to carry the ball that many times,” he said. “I prepare in the offseason for a reason. The O-line killed it today. I feel like we have the best O-line in the country. They made my job easy. They allowed me to get to the second-level defenders real quick.”

“We knew very well he can handle that,” coach Jim Harbaugh said. “This isn't something he just goes out and does. It's a seven-day-a-week, year-round thing for him, to train himself to be in a position to do what he does.”

Taulia Tagovailoa completed 20 of 30 passes for 207 yards and a touchdown but was also picked off twice for the Terrapins (3-1, 0-1). He didn't finish the game due to minor knee and rib injuries.

McCarthy hit Roman Wilson with a 20-yard scoring pass 44 seconds into the fourth quarter to give Michigan a 24-13 lead. Tagovailoa's 4-yard touchdown pass to Tai Felton with 9:10 left cut the Wolverines' lead to five points. The 2-point conversion attempt failed.

Maryland hasn't defeated a Top 5 team since 2004 and coach Mike Locksley felt his team could have ended that steak.

“I think we took a step forward in terms of getting it to where we said we needed to get the game — into a fourth-quarter opportunity for us. And we did that. But we didn’t make the plays when the plays were there to be made," he said.

The Wolverines reached the end zone eight seconds into the game, the fastest they've scored since at least 2003. Felton mishandled the opening kickoff and Michigan's Matthew Hibner recovered at the Terrapins 10-yard-line. McCarthy threw a touchdown pass to tight end Luke Schoonmaker on the next play.

“I hate it, because we gave them a cheap touchdown,” Locksley said. “It’s a routine catch. ... Tai had high hands, the ball hits off his face mask. Obviously it’s a mistake. And good teams don’t need our help."

Maryland led by three points late in the half before Corum cut left and scored on a 33-yard run during a 4th-and-1 situation.

“That was supposed to go only one or two yards,” Corum said. “J.J. snapped the ball quick and we caught them off guard. That definitely was a momentum change."

Maryland placekicker Chad Ryland increased his consecutive field goal streak to 22, the longest active streak in the nation. Ryland connected from 53 and 52 yards out in the first half. He played his first two seasons at nearby Eastern Michigan.

The famed Michigan Stadium tunnel in which players enter and exit the field will soon have a name. The University of Michigan Board of Regents approved on Thursday the athletic department's request to name the tunnel after former coach Lloyd Carr. The Lloyd Carr Tunnel will be formally dedicated prior to the next home game against Penn State on Oct. 15.

Maryland: The Terrapins look much improved from the team that lost by 41 points at home to the Wolverines late last season. But they're not yet good enough to overcome turnovers and beat a quality conference opponent.

Michigan: When C.J. Stokes fumbled away his only carry early in the game, the Wolverines relied solely on Corum for their ground game. They'll need a swift return from Donovan Edwards, out for the second straight week with an undisclosed injury, or another option to emerge to keep Corum fresh.

The Wolverines shouldn't drop more than a notch from the No. 4 spot despite getting challenged for the first time this season.

Maryland: Hosts Michigan State on Oct. 1 and plays another home game against Purdue on Oct. 8.

Michigan: Visits Iowa on Oct. 1 and plays another road game against Indiana on Oct. 8.