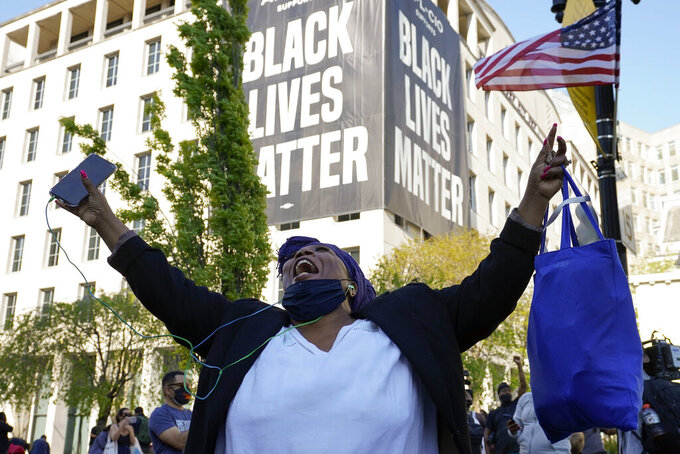 Lisa Robinson of Washington, reacts on Tuesday, April 20, 2021, in Washington, as the guilty verdict in Minneapolis, in the murder trial against former Minneapolis police officer Derek Chauvin was announced. (AP Photo/Alex Brandon)

USC was supposed to take the field on Tuesday for one of its final practices of the spring football season.

The Trojans decided football was secondary.

A short time after former Minneapolis police officer Derek Chauvin was convicted of murder and manslaughter for causing the death of George Floyd by holding his knee on the Black man’s neck — a killing that touched off worldwide protests — the Trojans decided the day would be best served reflecting and participating in the national conversation about racial inequality and police brutality.

“Following today’s verdict in the murder trial of George Floyd, our team has decided to postpone today’s practice, and instead discuss the racial injustices prevalent in our society and in our daily lives,” read the USC statement. “While we realize there is much work to be done, it is important to not push the conversation to a later date as our Los Angeles community has witnessed injustices for years.”

Some pro leagues braced for the potential of protests following the verdict — the NBA told its teams to have plans ready — but games went on as scheduled Tuesday except for those postponed by weather or coronavirus-related concerns.

“We as a league really didn’t know if we were going to play this game,” Atlanta Hawks coach Nate McMillan said before his team played host to the Orlando Magic, one of Tuesday's five NBA contests. “It was kind of on hold to see what the ruling was going to be. Possibly there would have been a cancellation if it had been a little different.”

The NBA shut down for three days last summer in the restart bubble at Lake Buena Vista, Florida, following the shooting of Jacob Blake, a Black man, by police in Kenosha, Wisconsin. Much of the league’s messaging in the bubble revolved around remembering some of those who had been killed by police, such as Breonna Taylor, Ahmaud Arbery and Floyd.

Most leagues and teams put out statements following the reading of the verdict, condemning racial injustice. Many athletes did as well.

“Justice served on all counts. Good. Still a ton of work to do,” read a tweet from Bubba Wallace, the lone Black driver on the NASCAR circuit, who last year successfully pushed the sport to ban the Confederate flag at its events.

Augsburg University, a private Division III school in Minneapolis, called off its Tuesday games involving its men’s soccer and women’s lacrosse teams. The school canceled classes for the rest of the day once word came that a verdict had been reached and scheduled an on-campus vigil for students, faculty and staff.

Some high school events in the Minneapolis area were also called off for the day.

Find AP’s full coverage of the death of George Floyd at: https://apnews.com/hub/death-of-george-floyd