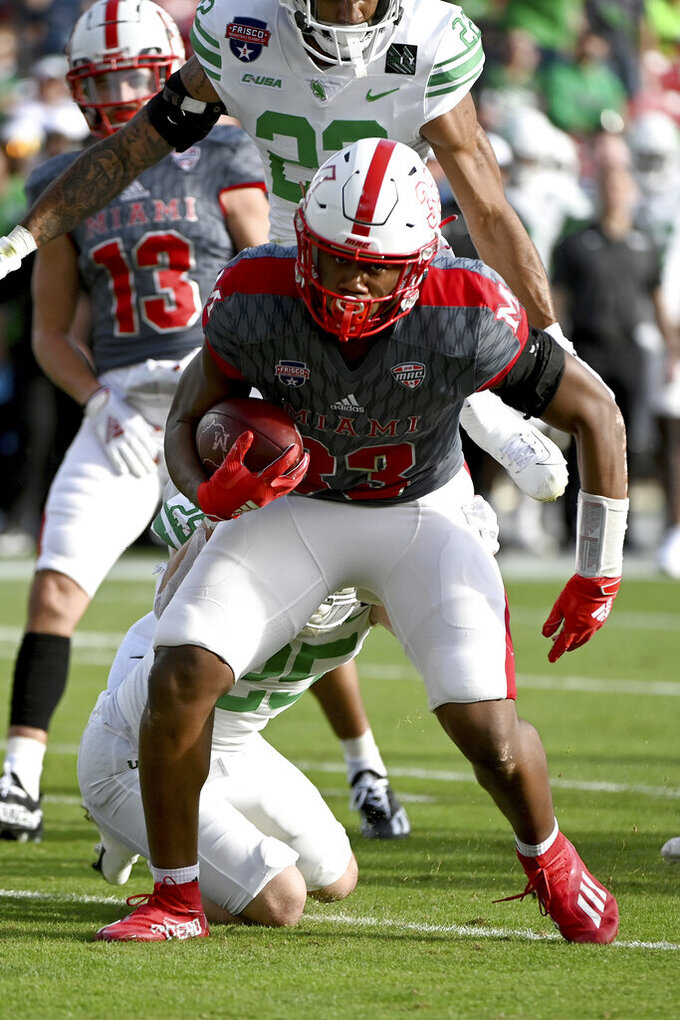 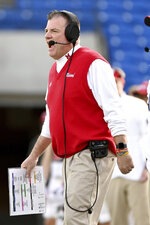 Gabbert, the brother of NFL quarterback Blaine Gabbert, threw a 5-yard scoring pass to Kenny Davis late in the second quarter and an 11-yarder to Nate Muersch early in the third quarter for Miami (7-6), which won a bowl game for the first time since the 2010 season.

Gabbert was named the game’s offensive MVP. The defensive MVP was Miami freshman nickelback Jacquez Warren, who had an interception at the goal line.

After Miami stopped North Texas inside the RedHawks’ 5-yard line early in the fourth quarter, Gabbert escaped pressure -– as he did much of the game –- on third-and-8 deep in Miami territory to run for the first down that allowed the RedHawks to run out the rest of the clock.

“I was going to do everything I had to win this game,” said Gabbert, a sophomore. “Momentum kind of flipped, and we just kind of rolled from there.”

“Brett Gabbert’s No. 1 quality is his toughness,” RedHawks coach Chuck Martin said. “They got to him. They hit him. I love all the throws and all the decisions, the quick release. If we were all as tough as him, we’d never lose a game.”

Nicholson made a 48-yard field goal on the RedHawks’ opening drive, which was one yard shy of his season high, and a 36-yarder in the second quarter.

Austin Aune and Isaiah Johnson scored on runs of 2 yards and 1 yard for the Mean Green (6-7). Aune was 15-of-32 passing for 228 yards and two interceptions.

“Every loss is tough,” North Texas coach Sean Littrell said. “If it’s not, you’re probably in the wrong profession.”

North Texas played without two senior starters, running back DeAndre Torrey and safety Makyle Sanders, for unstated reasons. Torrey had averaged 101.3 rushing yards per game, 41% of the 245.5-yard team average that ranked fourth in the FBS.

The Mean Green had 32 rushes for a season-low 89 yards, led by Aune’s 28 yards. North Texas had averaged 50 rushes per game this season.

The bowl game, played at Toyota Stadium, which had hosted the Frisco Bowl on Tuesday night, was hastily created a few weeks ago when 83 NCAA Division I teams were eligible to fill the slots of the 41 NCAA-approved postseason games.

“A lot of people didn’t want to go to the new bowl,” Martin said. “We all got memories of a lifetime because smart people put their heads together and got this thing going.”

Miami: The RedHawks were a two-point conversion away from winning the MAC East. They extended their streak of seasons at .500 or better to four straight.

North Texas: The loss ended a five-game Mean Green winning streak following a 1-6 start, and leaves them with their third straight losing season. Littrell is 0-5 in bowls in six seasons.

Think coaches live in a work bubble? “My wife says we’ve got Christmas in a couple days,” Martin said. … The game ended a streak of 141 consecutive RedHawks games played on artificial turf, dating to their 2010 opener at Florida. … Mean Green junior punter Bernardo Rodriguez, a transfer from Kansas State, had punts of 70 yards (the 15th longest in program history) and 66 yards.