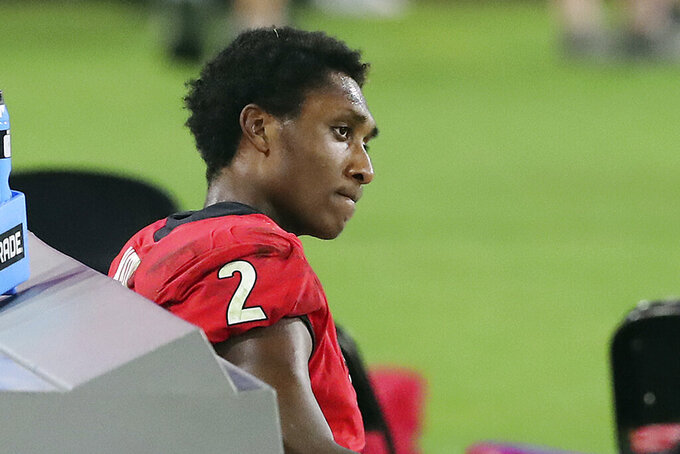 FILE - In this Nov. 7, 2020, file photo, Georgia quarterback D'Wan Mathis looks on from the bench after throwing an interception in the final seconds of an NCAA college football game against Florida in Jacksonville, Fla. Mathis, who opened the season as No. 11 Georgia's starter before losing his job, has entered the NCAA transfer portal. Coach Kirby Smart confirmed the transfer decision by Mathis on Monday, Nov. 30, 2020, as the Bulldogs opened practice for Saturday's visit from Vanderbilt. (Curtis Compton/Atlanta Journal-Constitution via AP, File)

Quarterback D’Wan Mathis, who opened the season as No. 11 Georgia’s starter, has entered the NCAA transfer portal.

Coach Kirby Smart said Monday he wanted Mathis, a redshirt freshman, to continue his career at Georgia, where JT Daniels has emerged as the starter.

Mathis, a redshirt freshman, was not with the Bulldogs for Saturday's 45-16 win at South Carolina on Saturday. That led to questions that Mathis might enter the transfer portal as the Bulldogs prepare for this week's game against Vanderbilt.

Mathis could not hold the starting job after winning a preseason competition after Wake Forest transfer Jamie Newman, the projected starter, opted out of the season.

Stetson Bennett replaced Mathis in Georgia's win over Arkansas to open the season. Mathis completed 8 of 17 passes for 55 yards with an interception before giving way to Bennett.

Daniels passed for 401 yards and four touchdowns in his debut, a 31-24 win over Mississippi State on Nov. 21. Daniels led a more balanced offense against South Carolina.

Mathis enrolled at Georgia in 2019 before severe headaches and sinus pressure led to him undergoing surgery to remove a cyst from his brain and sitting out the season.

Mathis (6-5, 205) offered a unique combination of size, speed and arm strength. He completed 12 of 30 passes for 89 yards with one touchdown and three interceptions.

Mathis, a native of Belleville, Michigan, initially committed to Ohio State. Mathis changed his decision and signed with Georgia after Justin Fields transferred to Ohio State.

Georgia has Daniels, Bennett and freshman Carson Beck as its scholarship quarterbacks.

Tight end Tre' McKitty, a graduate transfer from Florida State, said he talked with Mathis about his decision.

“I was pretty close to D’Wan so me and him had some conversations about it,” McKitty said Monday. “... I did the same thing. We’re in the same position, me and D’Wan. I made a decision I thought was best for my future and he’s doing the same thing and I wish him the best of luck.”

“He has to do what is best for himself and his future,” Robertson said. “I wish him the best of luck and I hope he does great things.”