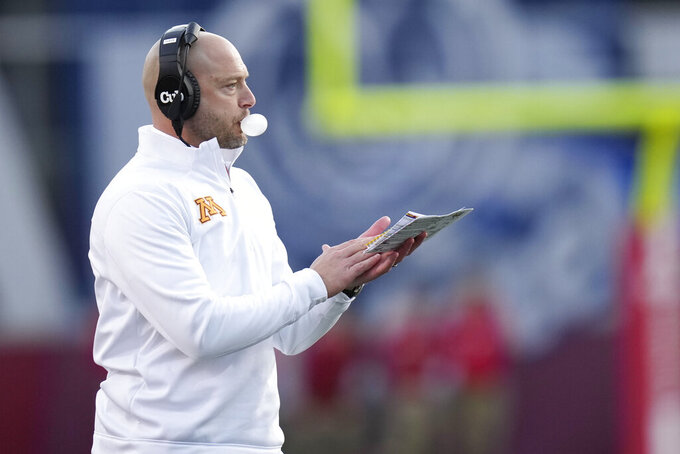 Thomas ran for two scores, Morgan threw for two more and Minnesota produced two touchdowns in the final 46 seconds of the first half before pulling away from Indiana 35-14.

”It's been a long few weeks," coach P.J. Fleck said. “This game was going to be really short, it felt like. Whatever happens, I just like the way our guys have responded."

This time the Golden Gophers found some offensive punch behind Thomas, who ran 26 times for 105 yards, and Morgan, who threw more TD passes in four quarters than the previous four games.

But Nubin's big play changed everything.

After Thomas tied the score at 7 midway through the second quarter and broke the tie with a 1-yard TD run with 46 seconds to go, Nubin picked off Donaven McCulley’s floater and returned it to Indiana’s 31-yard line. Three plays later, Morgan hooked up with Chris Autman-Bell on a 14-yard TD pass that made it 21-7 — after a replay review overturned the incompletion call on the field.

Indiana started fast, capping an impressive opening drive with McCulley scooping up a fumbled snap and scoring from 11 yards out.

But Morgan didn't fret. He let the ground game keep them in the contest and then connected with Autman-Bell twice for scores to seal it.

“He's the all-time winningest quarterback in the history of our school," Fleck said after giving Morgan a game ball. “”That's a long time. Winners find ways to win."

Minnesota: The Golden Gophers needed something to go right and a trip to Indiana did the trick. Minnesota played more like the team that won four straight in October than the one that struggled to score against Illinois and then No. 19 Iowa. Next week's game will dictate the Gophers' postseason fate — and perhaps the West Division championship.

Indiana: The Hoosiers added another dubious chapter to an already lost season by going winless at home in conference play for the first time since 2015 and just the third time since 2011. One goal still remains: Keeping the Old Oaken Bucket with a win next weekend.

Minnesota: Thomas has four 100-yard games this season -- all since Oct. 23. ... Tight end Brevyn Spann-Ford caught three passes for a career-best 67 yards. He nearly surpassed his previous career high (49 yards) on a 48-yard completion in the first half. ... Autman-Bell had four catches for 44 yards. ... Morgan threw more TD passes Saturday than he had in his previous four games (one).

Indiana: The Hoosiers managed just 218 total yards and have now scored nine TDs in conference play. They’ve produced more than one touchdown in just twice against Big Ten foes this season. .. McCulley was three of seven with 17 yards and two interceptions and rushed 16 times for 72 yards. ... Safety Devon Matthews did not return after injuring his left shoulder in the first half.

Minnesota: Faces No. 15 Wisconsin for Paul Bunyan's Axe next Saturday.

Indiana: Will renew its rivalry at Purdue next Saturday after the series was canceled twice last season.