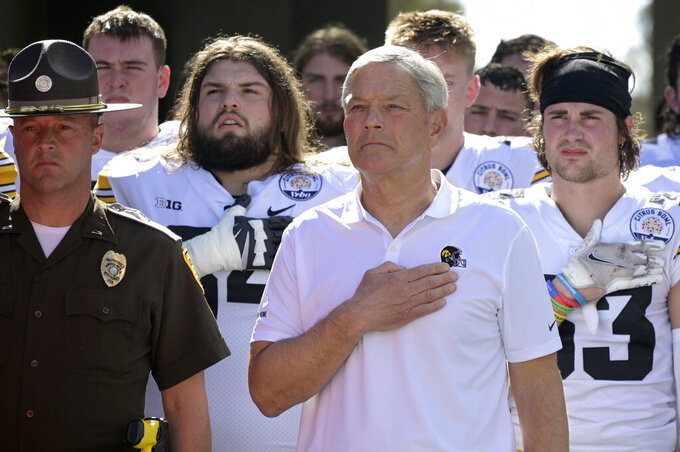 FILE - Iowa head coach Kirk Ferentz, front right, stands for the national anthem before the Citrus Bowl NCAA college football game against Kentucky, Saturday, Jan. 1, 2022, in Orlando, Fla. Iowa hired Lorenda Holston as assistant athletic director for diversity, equity and inclusion and Anthony Embry for the newly created position of athletics academic and diversity coordinator, the university announced Friday, July 22, 2022. The announcement comes as the university and head football coach Kirk Ferentz and others face a lawsuit by former football players who allege they faced discrimination and harassment from coaches and staff because they are Black.(AP Photo/Phelan M. Ebenhack, File)

The moves come as the university faces a lawsuit by former football players who allege they faced discrimination and harassment from coaches and staff because they are Black.

“These additions to our staff enhance our overall campus and athletics department commitment to DEI, while working with our student-athletes and staff as we continue to move forward with increased staffing and resources in this critical area," said Liz Tovar, senior associate athletic director and the university's executive officer and associate vice president of the Division of Diversity, Equity and Inclusion.

The former players' lawsuit was filed in November 2020, naming head coach Kirk Ferentz and offensive coordinator Brian Ferentz, his son. They allege they were demeaned with racial slurs, forced to abandon Black hairstyles, fashion and culture to fit the “Iowa Way” promoted by Kirk Ferentz, held to different standards than white players and retaliated against for speaking out. Iowa linebackers coach Seth Wallace was added as a defendant in the lawsuit in April.

The university agreed to pay strength coach Chris Doyle $1.1 million as part of a resignation agreement in June 2020, after dozens of former players said on social media he had bullied and discriminated against them. Doyle has denied the allegations.