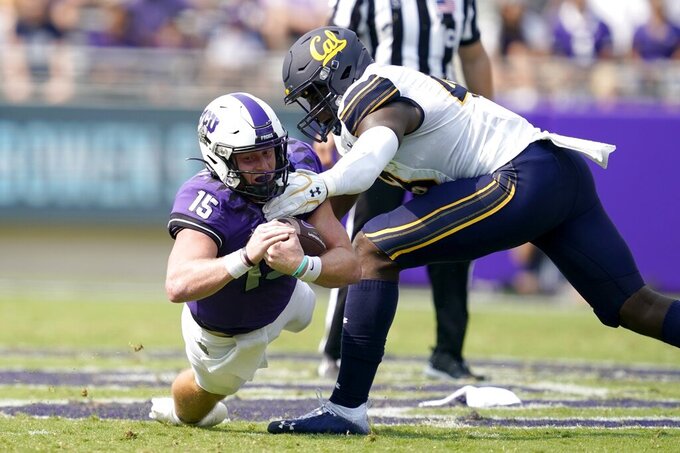 Johnston put the Horned Frogs (2-0) ahead to stay with the 45-yard TD catch with 9:53 left, when he twisted around one defender who fell down near the 30 and then shed the attempted tackle by another inside the 10. Johnston finished with five catches for 95 yards.

“I think I speak for the whole team when I say this ... we were very excited when he caught it,” said running back Zach Evans.

“I try to make that my main threat, getting yards after catch, just a lot of people think I’m 6-4, just a tall lanky receiver, getting the ball and go straight down,” Johnston said. “But I try to prove that I can do more than that.”

After starting 0-3 in their pandemic-shorted 1-3 season last year, the Bears have 0-2 starts in consecutive seasons for the first time since 1994 and 1995.

Cal led 19-7 after Garbers threw a 7-yard TD to Nikko Remigio. That was a play after a 68-yard catch by Trevon Clark, whose only other catch was a 54-yard TD.

“Unfortunately we didn't get the win, but feel like we made a lot of strides as a team,” Garbers said.

Evans scored for the Frogs with 11 seconds before halftime, and they opened the second half with a 15-play, 75-yard drive that ended with Johnston's 18-yard catch that gave them their first lead at 21-19.

“For us, not playing a bowl game (last season), we knew this game was a big game to find a way to win,” Patterson said. “It wasn’t pretty, especially on defense. We know we’ll play better. I think it’s a big deal.”

California: Another early two-touchdown lead wasted by the Bears, just like in their opener. They had plenty of missed points this time. On their opening drive, they passed up a field goal try and were stopped on fourth-and-1 from the 7. They did go ahead 12-0 on Clark's 54-yard TD catch and Daniel Scott’s 8-yard interception return for a touchdown. There was a botched snap on the first PAT try. They made the kick after the second TD, but took that point off the board after a TCU penalty and tried for 2 — and failed. They had to try a 2-point conversion after Damien Moore's 1-yard TD with 4:09 left, but he was stopped short when he lost the ball reaching for the end zone. Cal led 14-0 after its first two drives at home last week against Nevada before losing 22-17.

TCU: The Frogs are 8-0 against Pac-12 teams in Patterson's 21 seasons, this being only the second of those games at home. The last Pac-12 opponent had also been Cal, in the Cheez-It Bowl they won 10-7 in overtime three seasons ago. A planned opener at California last season was canceled because of the pandemic.

TCU has won five games in a row dating back to last season, and seven of eight overall. ... Cal is 10-3 against non-conference opponents under Wilcox, with two of those losses to TCU. .. Garbers’ 235 yards before halftime were the most in any half for the fourth-year quarterback.

TCU could move into the AP Top 25 poll for the first time since spending one week ranked in September 2019. The Horned Frogs just missed being ranked last week, when they were the first team among others receiving votes.

California: The Bears will be at home to play Sacramento State next Saturday in their last non-conference of the season.

TCU: The Horned Frogs have a bye week before playing SMU at home on Sept. 25.