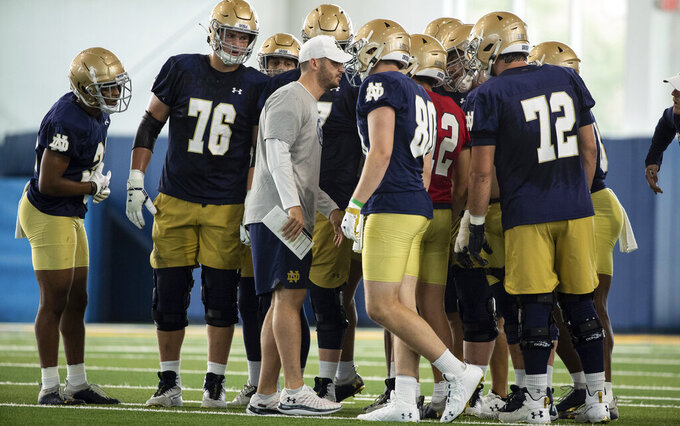 SOUTH BEND, Ind. (AP) — Brian Kelly welcomed a Notre Dame football team that is mostly free of injury and illness to its first workout of the season Saturday.

Whether Kelly — entering his 12th season as Notre Dame 's coach and four victories shy of surpassing Knute Rockne’s 105 victories as the winningest Fighting Irish coach — will be able to say that Sept. 5 when his team opens at Florida State is another matter.

COVID-19 hospitalization numbersare surging around the United States because of the Delta variant. And the Irish have adopted many of the precautions they took following a three-week pause in late September and early October last season after a team outbreak following a 52-0 victory over South Florida.

“The good news is we’re 95% vaccinated,” Kelly said. “Look, we’re prepared because we went through it last year, to wear masks, social distance, do all the things because we unfortunately had to go through that.”

The Irish returned from their shutdown with a 42-26 victory over Florida State on their way to a 10-0 regular season. They went 9-0 in the Atlantic Coast Conference, highlighted by a 47-40 double-overtime victory over then No. 1 Clemson on Nov. 7.

But the 2020 season ended with losses to No. 3 Clemson (34-10) in the ACC Championship and 31-14 to eventual national champion Alabama in the College Football Playoff semifinal in the Rose Bowl that left the Irish fifth in the final Associated Press poll.

"I think we feel really comfortable where we are,” Kelly said about COVID preparations for 2021. “We know there’s the potential that it could go back to that, and I think we’ve made the appropriate arrangements.”

With Ian Book, the school's all-time winningest quarterback, now a rookie with the New Orleans Saints, graduate transfer (from Wisconsin) Jack Coan took the snaps at quarterback from senior center Jarrett Patterson with the No. 1 offensive unit.

That unit included sophomore tight end Michael Mayer (42 receptions, 450 yards) and sophomore 1,125-yard rusher Kyren Williams. Patterson, who missed the last three games and all of spring after foot surgery, pushed his replacement Zeke Correll to left guard on an offensive line that lost three starters to the NFL. All-American Cain Madden, a grad transfer from Marshall since last spring, was running with the second unit.

Braden Lenzy, a senior speedster hampered by hamstring issues in 2020, was running with the first-team wide receivers. Among them were grad Avery Davis and senior Joe Wilkins Jr. Senior Kevin Austin Jr., maybe the most talented of the wideouts, missed most of last season with a broken foot but looked healthy again .

The Irish defense, which surrendered 65 points and 978 total yards in losses to the Tigers and Crimson Tide, has a new coordinator. Marcus Freeman came over from Cincinnati to replace Clark Lea, now the head coach of his alma mater, Vanderbilt.

Under Freeman, the Bearcats last year finished eighth nationally in scoring defense (16.8 points per game) and 13th in total defense (324.6 yards per game) with an attacking style.