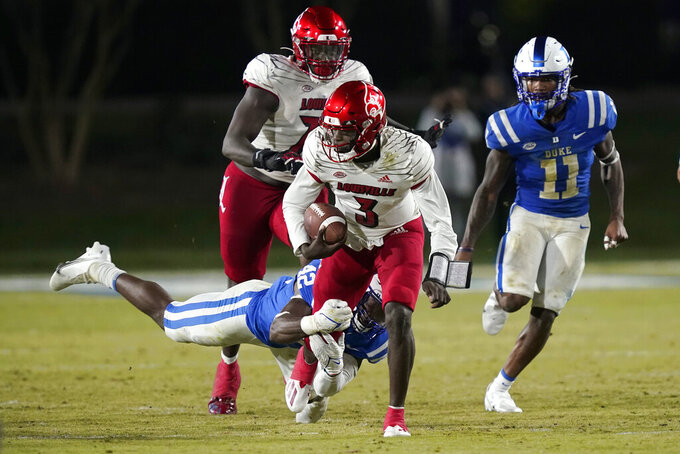 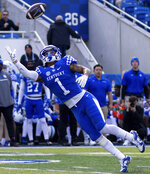 As the in-state rivals await postseason destinations, they're eager to square off again for the Governor’s Cup and the bragging rights that come with it.

“We’re just trying to get that payback for 2019,” said Louisville senior linebacker C.J. Avery, referring to the Cardinals’ 45-13 loss in Lexington. “That was the last chance we got to play them, and we’re just ready to get out there and play.”

The rivalry resumes Saturday night after last year’s pause as the teams played conference-only schedules because of the coronavirus pandemic. Both enter with two-game winning streaks by convincing margins that have quelled some concerns — for now — following second-half struggles.

Louisville (6-5) has made the biggest improvement since losing four of five despite holding fourth-quarter leads. The Cardinals finished 4-4 in Atlantic Coast Conference play with consecutive blowouts of Syracuse and Duke by a combined 93-25 margin.

Last week’s 62-22 pasting of Duke was impressive enough for oddsmakers to establish Louisville as a slight favorite, a scenario that seemed unlikely a month ago.

“There’s been a lot of different guys, including (quarterback) Malik (Cunningham), and it’s been fun to see how the offense has come together,” coach Scott Satterfield said. “Hopefully, this offense will continue to grow and be one of the most explosive offenses in the country.”

Kentucky (8-3) seeks its third straight Governor’s Cup victory and fourth in five seasons. The Wildcats can also reach nine regular-season wins for just the second time since 1977 and the first since the breakout 2018 season capped by a bowl win over Penn State.

They have overcome a three-game slide with consecutive victories over Vanderbilt (34-17) and nonconference New Mexico State (56-16). Kentucky rolled up 707 yards of offense last week, the second-highest total in school history.

The rout also included four turnovers and breakdowns that bothered coach Mark Stoops afterward. He’s stressing the importance of correcting things, especially to the underclassmen that will experience the rivalry for the first time.

And hopefully, hoist that 85-pound trophy.

“Coach Stoops is doing a great job of letting those younger guys know that this is a rivalry game, and we are doing so as well,” said Kentucky senior defensive end Josh Paschal, whose entertaining commercial for a pediatric dental firm has gone viral this week.

“I feel like this whole team knows that this is going to be a dogfight on Saturday. ... We are ready to compete, and ready to get back to owning the state.”

Cardinals QB Malik (3,582 yards, 36 touchdowns) raised the bar against the Blue Devils with seven total touchdowns and 527 offensive yards. He’s just the second player in NCAA history since Washington’s Marques Tuiasosopo in 1999 to rush for more than 200 yards and pass for more than 300.

“Everybody thinks about just him and his legs, but he’s really smooth in the pocket,” Kentucky defensive coordinator Brad White said. “To say it’s a huge challenge is a little bit of an understatement.”

Cunningham’s TD total at Duke is second to Lamar Jackson, who had eight against Charlotte in his Heisman Trophy-winning 2016 season.

Louisville’s defense has its own tall task accounting for Kentucky’s dangerous offensive trio of quarterback Will Levis, running back Chris Rodriguez Jr. and receiver Wan’Dale Robinson. Levis has completed nearly 66% of his passes for 2,444 yards and 23 TDs. Robinson (1,067 yards, six TDs) has the program's second-highest single season total, while Rodriguez has 1,151 yards rushing with seven TDs.

Kentucky committed four turnovers last week, including two by Levis and a fumble by Rodriguez. The Wildcats have 22 giveaways and rank next to last in turnover margin at minus-13, just two fewer than Arizona. Louisville is among seven tied for 50th nationally at plus-2 and haven’t coughed it up the past three games.

Both teams are effective getting to quarterbacks while protecting their own. Louisville’s 30 sacks are just two more than Kentucky with both ranked in the top 45 nationally. The Cardinals are tied for 30th in sacks allowed with 17, just one fewer than the 34th-ranked Wildcats.

Kentucky is among the nation’s best on the money down, ranking sixth in FBS with a 50.4% conversion rate. Louisville has made nearly 40% of its chances. Opponents are converting just 34% of their chances against the Cardinals, 39% against the Wildcats.