Longtime NFL coach Wilks heads back to college at Mizzou 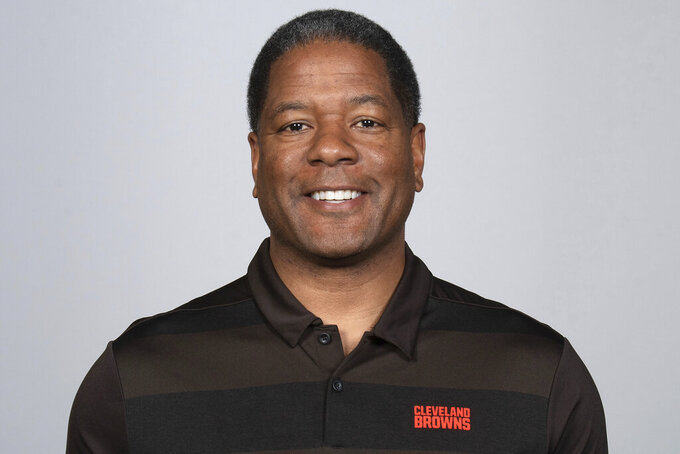 FILE- This is a 2019 photo of Steve Wilks of the Cleveland Browns NFL football team. Wilks is the new defensive coordinator at Missouri, where he replaced Ryan Walters after his departure for Illinois. (AP Photo)

COLUMBIA, Mo. (AP) — There are a lot of coaches who are looking forward to stepping onto the sideline Saturday and enjoying the buzz that comes with full crowds in college football stadiums for the first time in nearly two years.

Steve Wilks is looking forward to doing it for the first time in more than 15.

The longtime NFL coach hasn't been on a college sideline since 2004, when he was the defensive backs coach at Notre Dame. Since then, he's been the secondary coach for four professional franchises, the defensive coordinator for three and spent one season as the head coach of the Arizona Cardinals, winning just three games before getting fired.

Now, he's back in the college game as the defensive coordinator at Missouri.

“I think everybody sort of missed the gameday excitement with the fans, you know? The atmosphere,” said Wilks, who was hired in January to replace Ryan Walters, the longtime Tigers assistant who left for the defensive coordinator job at Illinois.

“I've heard nothing but great things about SEC football on Saturday — the fans, the tailgating,” Wilks added, “so just to get back on the sideline and have our fans back in Faurot Field is going to be exciting for us.”

Missouri did allow some fans last season — about 18% of capacity, or 11,800 — for its SEC-only schedule during the first throes of the pandemic. The Central Michigan matchup will be the first time second-year coach Eli Drinkwitz gets to experience a full home crowd in Columbia, too.

Yet that seems like the blink of an eye compared to how long Wilks has been out of the college game. Not to mention being a defensive coordinator at the college level.

The 52-year-old Wilks got his start at Johnson C. Smith, a Division II school in North Carolina, before beginning a coaching odyssey that took him to Savannah State, Illinois State, Appalachian State, East Tennessee State and Bowling Green.

He spent one season with the Fighting Irish before the NFL came calling, and that odyssey continued with stops in Washington, Chicago, San Diego, Carolina, Arizona and Cleveland, where he spent one year as the defensive coordinator before parting ways and spending last season out of football entirely.

He didn't stop watching football, though. He may have spent more time watching it, dissecting the latest trends in tempo and spread offenses that had swept through college football with an eye on getting back into that part of the game.

The timing with the Tigers happened to work out perfectly.

Walters had coached under Gary Pinkel and was retained by Barry Odom and Drinkwitz, but the defense appeared to have stagnated last season. It gave up 100 points and more than 1,000 yards in season-ending losses to Georgia and Mississippi State, and that may have been a sign it was time for Walters and the Tigers to head in different directions.

Wilks came aboard with a much different defensive system.

“It's a different defense in a very good way,” Tigers defensive back Martez Manuel said. “It's a lot more schematic. A lot more discipline. A lot more of an NFL-style defense, a lot more aggressive. We've really been preaching physicality and effort all summer, all offseason, so I think that physicality is something fans can be ready to see.”

The Tigers were minus-5 in turnover differential last season, so some extra aggressiveness on defense wouldn't hurt. They allowed more than 400 yards total offense per game, so a little bit of physicality would be a good thing, too.

Drinkwitz believes they will showcase both of those elements this season, though he won't know for sure until Saturday.

“I feel very comfortable with the scheme we're trying to install,” he said. “I feel like our defense is very comfortable with what we're asking them to do. But we haven't been tested by fire yet. We haven't had the adversity of being down or giving up points on the scoreboard. And we'll just have to see how that all works together.”