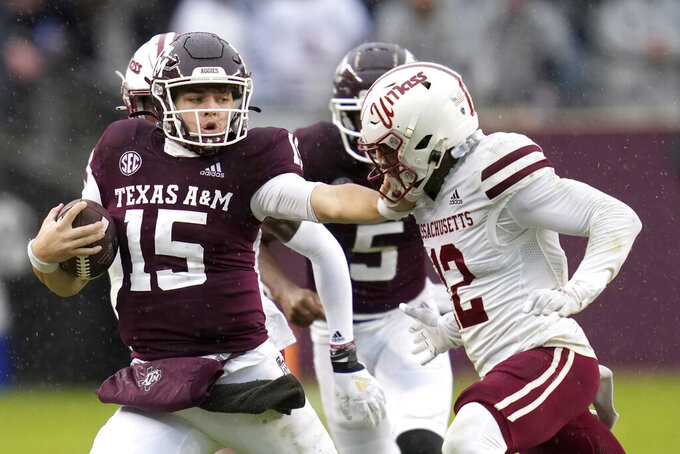 Texas A&M quarterback Conner Weigman (15) stiff arms Massachusetts defensive back Josh Wallace (12) during a run for a first down during the first half of an NCAA college football game Saturday, Nov. 19, 2022, in College Station, Texas. (AP Photo/Sam Craft)

The Tigers, winners of five straight, have already secured a spot in the SEC title game against top-ranked Georgia but must take care of business against lowly Texas A&M to have any chance of sneaking into the College Football Playoff. The Aggies snapped a six-game skid with a sloppy win over UMass last week and hope to build on that victory Saturday as they wrap up a disappointing season.

LSU QB Jayden Daniels vs. Texas A&M’s defense. The dual-threat Daniels not only leads the Tigers with 2,377 yards passing, he is also the team’s top rusher with 740 yards. The Aggies rank second in the nation by allowing just 152.5 yards passing a game but have struggled against the run. They rank 123rd in the country by allowing a whopping 210.8 yards rushing.

LSU: LB Micah Baskerville is first on the team with 66 tackles, including four tackles for losses and a sack. He has two games this season with more than 10 tackles and has an interception.

Texas A&M: Coach Jimbo Fisher said this week that he is “very optimistic” that top RB Devon Achane can return Saturday after missing the last two games with a foot injury. Achane leads the team with 887 yards rushing and his 98.6 yards a game average ranks third in the SEC.

The Tigers are 8-2 since against the Aggies since they joined the SEC in 2012. … LSU won seven in a row in the series from 2011-17. Texas A&M ended that streak with a 74-72 victory in an epic seven overtime game at home in 2018. …The Tigers are looking for their first 10-win season since going 15-0 in 2019 to win the national championship. … LSU coach Brian Kelly is 54-19 as an FBS coach in November games. He has never faced Texas A&M. … LSU LB Harold Perkins leads the Tigers with 6 ½ sacks and nine tackles for losses. … WR Malik Nabers had a career-high seven receptions for 129 yards last week. … RB Noah Cain ran for 76 yards and a career-best three touchdowns last week. … Texas A&M’s four wins are the team’s fewest since going 4-8 in 2008. … WR Evan Stewart ranks fifth in the SEC and leads all Power 5 freshmen with 67.4 yards receiving a game. … Aggies freshman QB Conner Weigman had 191 yards passing and a touchdown against UMass in his fourth start.