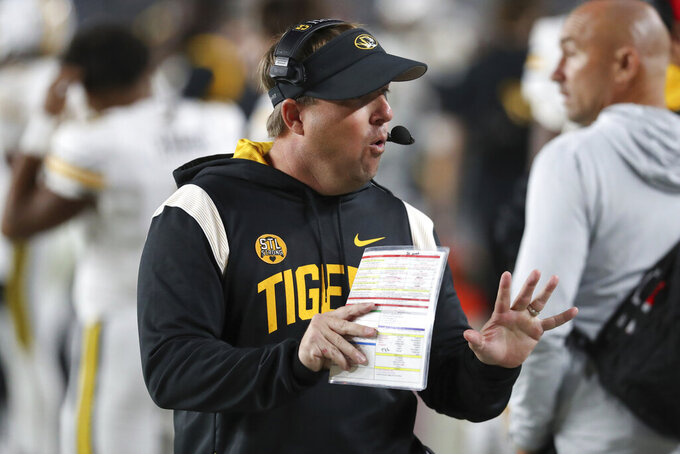 Missouri head coach Eliah Drinkwitz talks to his offensive line on the sideline during the second half of an NCAA college football game against South Carolina, Saturday, Oct. 29, 2022, in Columbia, S.C. (AP Photo/Artie Walker Jr.)

Missouri coach Eli Drinkwitz received a two-year contract extension Saturday, tying him to the program through the 2027 season, just hours before the Tigers lost another heartbreaker to Kentucky at Faurot Field.

The school did not announce the terms of the extension, though a university spokesman said Drinkwitz would receive an increase in guaranteed paid. His original six-year deal paid him $4 million annually before incentives.

“I know today's loss is disappointing,” Drinkwitz said after the 21-17 defeat to the Wildcats, “but it's the belief in how we're doing it and the direction that we're going, and really appreciate that belief. Belief's a powerful thing, and I talked about it a couple of weeks (ago), I really feel like we've improved in a lot of ways, and the results will come.”

All four losses by the Tigers (4-5, 2-4 Southeastern Conference) in league play have been by one possession: They fell 17-14 at Auburn when Nathaniel Peat fumbled the ball going in for the winning touchdown in overtime, blew a late lead in a 26-22 loss to top-ranked Georgia and lost 24-17 at Florida before letting a 17-14 lead against the Wildcats slip away Saturday.

Kentucky scored the go-ahead touchdown with 5:18 to play after Missouri had taken its first lead of the game.

“Obviously didn’t get it done today,” Drinkwitz said, “but we’re still heading in the right direction. We got to keep everybody pulling in the right direction. You know, we’ve got three games left and we’ve got a lot of opportunities ahead of us, two of those at home, and got a lot of opportunity ahead of us, and this team will stay together and fight.”

Drinkwitz was hired in 2019 after the program had slipped to mediocrity under Barry Odom, but his rebuild was made complicated by the onset of the COVID-19 pandemic. Drinkwitz, who had won 12 games in his lone season as head coach at Appalachian State, wound up 5-5 in his debut season and 6-7 with a loss in the Armed Forces Bowl last year.

The close call against the defending national champion Bulldogs showed the Tigers were on the right track, though, and back-to-back wins over Vanderbilt and South Carolina apparently gave Missouri officials confidence in the direction of the program. The university's board of curators voted 7-0 to approve Drinkwitz's contract extension.

“Coach Drinkwitz and his staff have created great momentum in our football program.” Missouri President Mun Choi said. “You can feel the excitement and you see it in the fans as they have turned out in great numbers at Faurot Field. Coach Drinkwitz’s program is a key part of the results-driven, championship culture that (athletic director Desiree) Reed-Francois is building to help support our student-athletes."

Earlier this week, first-year Missouri defensive coordinator Blake Baker agreed to an extension that will keep him with the Tigers through the 2025 season. It increased his pay from $600,000 to an average salary of $1.2 million.

“Our football team is on the right trajectory," Reed-Francois said, "and we are seeing results in recruiting and on the field. Coach Drinkwitz is a dynamic leader who brings people together and we believe in our football staff’s combined commitment to excellence in the classroom and in the community. We are looking forward to him continuing to lead our program into the future.”