Missouri needs to beat Arkansas to qualify for bowl game 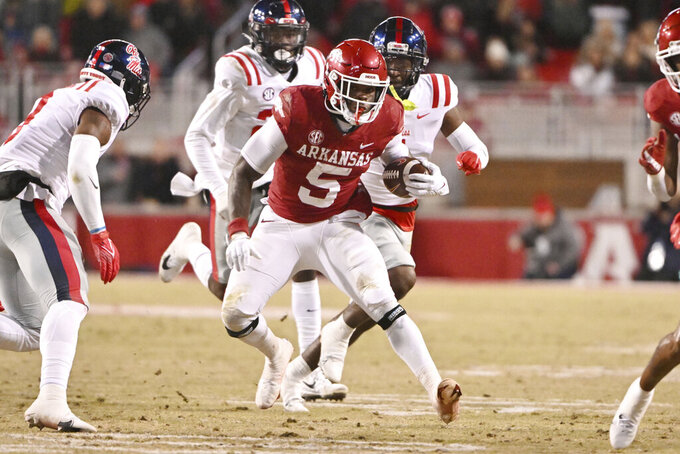 Arkansas running back Raheim Sanders (5) carries against Mississippi during the first half of an NCAA college football game Saturday, Nov. 19, 2022, in Fayetteville, Ark. (AP Photo/Michael Woods)

The Razorbacks have already clinched a bowl berth, and they can improve the destination by beating Missouri for the second straight time. But the Tigers need to beat their border rival if they want to qualify for a bowl game.

Arkansas RB Raheim Sanders against the Missouri run defense, which gave up 264 yards and five touchdowns in its last SEC game against Tennessee. Sanders is just six yards behind Quinshon Judkins of Ole Miss for the league lead with 1,379 yards this season.

Arkansas LB Drew Sanders had 10 tackles, an interception and two fumble recoveries in a 42-27 win over the Rebels last weekend. Before that, the SEC's leader in sacks had one in back-to-back games against Liberty and LSU.

Missouri WR Luther Burden had two touchdown receptions in last week's 45-14 win over New Mexico State, giving the five-star recruit five in his freshman season. It was a nice bounce-back performance after the Volunteers held him to two catches for 15 yards in Knoxville.

Sam Pittman is the fourth Arkansas coach to take the program to bowl games in his first three seasons. The others are Lou Holtz, Ken Hatfield and Houston Nutt. ... Arkansas has never won a game in Columbia, Mo. Its last road win over Missouri came in 1944 in a game played in St. Louis. ... The Razorbacks have 37 sacks, leading the SEC and tied for fourth nationally. ... Arkansas has had a 100-yard rusher in 10 of its last 12 games. ... Raheim Sanders had a career-best 232 yards last week against Mississippi. The Razorbacks ran for a season-high 335 yards. ... Arkansas scored 35 points in the first half against the Rebels. It was the highest-scoring first half for the program since 2016. ... Razorbacks QB KJ Jefferson had three first-half TD passes against Ole Miss. He finished 17 of 22 for 168 yards. ... Missouri has qualified for bowls the past two seasons and four of the past five. ... The Tigers scored 45 points against New Mexico State last week, their most since scoring 52 against Louisiana Tech in their opener. ... Missouri RB Cody Schrader had two TD runs against the Aggies. ... The Tigers did not allow New Mexico State into the red zone until late in the third quarter.