No. 1 UGA begins stretch run vs Florida in 'Cocktail Party' 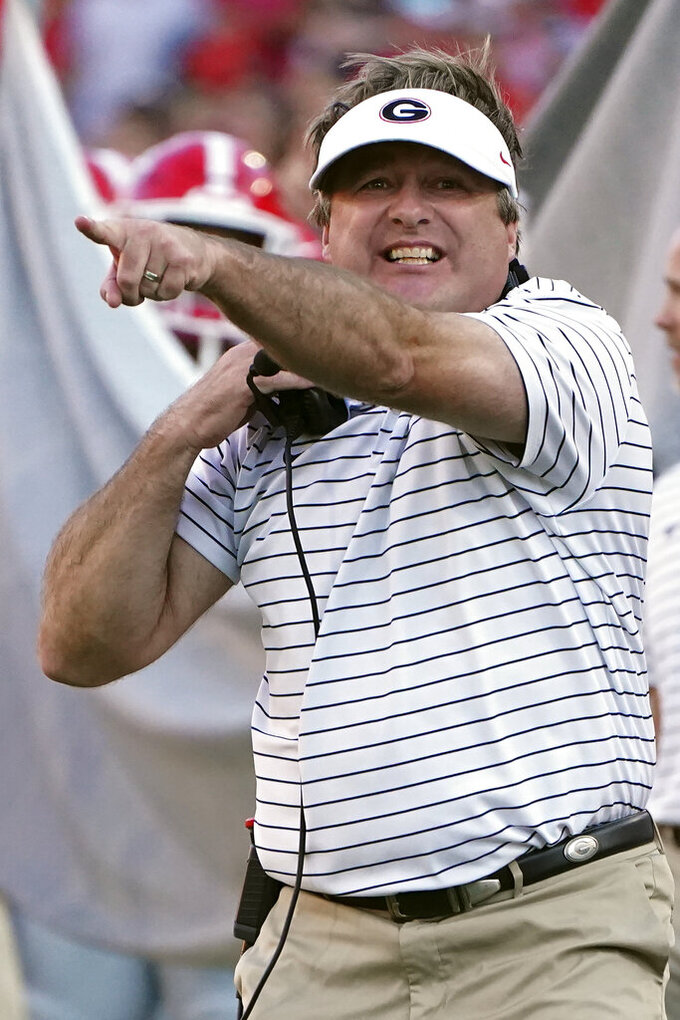 Georgia head coach Kirby Smart tries to get an official's attention during the second half of an NCAA college football game against Auburn, Saturday, Oct. 8, 2022, in Athens, Ga. (AP Photo/John Bazemore)

Line: Georgia by 22 1/2, according to FanDuel Sportsbook.

Series record: Debatable. Georgia says it leads 54-44-2 and counts a victory in 1904. Florida insists that first meeting came two years before the school formally formed its football program and says it should be 53-44-2.

The defending national champion Bulldogs have won nine consecutive games and 25 of 26 since losing to Florida in 2020 in the rivalry dubbed the “World’s Largest Outdoor Cocktail Party.” Georgia is entering the toughest part of its schedule, a four-game stretch that begins against the Gators and includes No. 3 Tennessee at home and then Mississippi State and 19th-ranked Kentucky on the road. If the Bulldogs win them all, they would be a virtual lock to return to the College Football Playoff. Florida, meanwhile, has lost 11 of its last 14 conference games.

Florida’s third-down defense has been dreadful all season. The Gators rank 130th out of 131 Football Bowl Subdivision teams on the so-called “money down” and now face Georgia, which leads the SEC and ranks ninth nationally in third-down conversions. Florida has allowed a 52.6% conversion rate; Georgia has converted 52.4% of the time.

Florida: QB Anthony Richardson could be a difference-maker in a game that, on paper, looks like a mismatch. Richardson threw for 453 yards and two touchdowns at Tennessee last month and ran for 109 yards and a score last time out against LSU. He has the ability to do both in the same game and might need to against Georgia.

Georgia: TE Brock Bowers has 26 receptions for a team-leading 393 yards and two touchdowns. He also has three rushing TDs on as many carries. The sophomore from California has been a matchup nightmare for just about every team he’s faced and could be a handful for the Gators, whose linebackers have struggled in coverage.

Florida is a 20-plus-point underdog for just the third time in at least the last three decades, maybe longer. The Gators were 24-point 'dogs against top-ranked and defending national champion Alabama in the 2016 SEC title game and were 28½-point dogs against undefeated and eventual national champion Florida State in Gainesville in 2013. They lost both game by lopsided margins. … Georgia has won four of the last five meetings in the series. … Former Georgia All-Americans Champ Bailey and John Little along with former Florida standouts Trey Burton and Andre Caldwell will be inducted into the Georgia-Florida or Florida-Georgia Hall of Fame. … Florida has scored in 429 consecutive games, an NCAA-record streak that began in 1988.