No. 12 UCLA looks to get back on track against Stanford 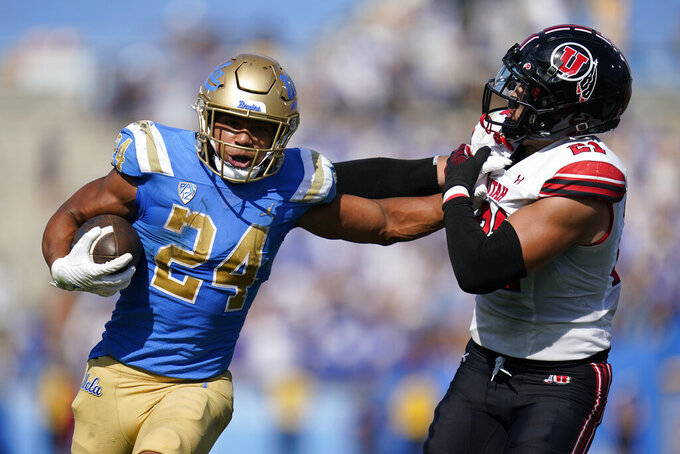 Stanford (3-4, 1-4 Pac-12) at No. 12 UCLA (6-1, 3-1), Saturday. The Cardinal have won two straight and snapped their 10-game conference losing streak with a 15-14 victory last week over Arizona State. The Bruins look to get back to their winning ways after last Saturday's loss at Oregon, but have not defeated Stanford at the Rose Bowl since 2008. Stanford coach David Shaw has a 10-2 mark against UCLA. The road team has won the last four meetings in this series.

No. 8 Oregon (6-1, 4-0) at California (3-4, 1-3), Saturday. The Ducks are looking to win their first five games in conference play since 2019, but have to face a Cal squad that has won two of the last three home games in the series. Oregon QB Bo Nix has 25 total touchdowns (17 passing, eight rushing) which is fifth in the nation. Cal WR J. Michael Sturdivant set career highs last week with eight receptions for 104 yards and two touchdowns.

Oregon State and Washington are off this week. ... The conference has five bowl eligible teams (Oregon, USC, UCLA, Washington, Oregon State) which is behind the SEC, which has six. ... Arizona State (2-5, 1-3) is looking to win on the road for the first time in four games this season when it visits Colorado (1-6, 1-3). The Buffaloes have been held to 20 points or less and under 350 total yards in all seven games this year. ... The Ducks are averaging 49 points during their six-game winning streak, which is second in the nation. ... Arizona's Jayden de Laura is only the second quarterback in school history with three 400-yard passing games in a season. Jason Johnson was the first in 2002. ... USC is the only team to have one turnover through seven games. ... California had a 19-game streak snapped last week in which it had forced a turnover.

Running back Zach Charbonnet, UCLA. The junior leads the conference in rushing with 766 yards and is averaging 7.2 yards per carry. He also leads the Pac-12 in all-purpose yards per game (156.2), which is fourth nationally. Charbonnet has six straight 100-yard games in the conference and has totaled 850 yards and six touchdowns during that span. He has also scored a touchdown in eight straight conference games.