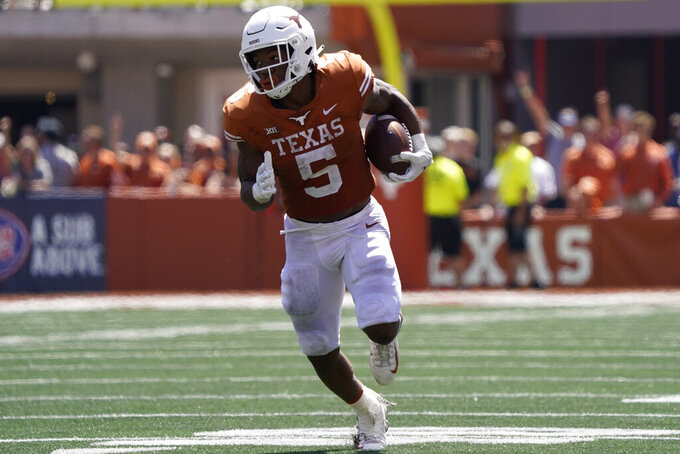 FILE - Texas running back Bijan Robinson (5) runs for a touchdown against Texas Tech during the second half of an NCAA college football game in Austin, Texas, in this Saturday, Sept. 25, 2021, file photo. Robinson was selected to The Associated Press Midseason All-America team, announced Tuesday, Oct. 19, 2021. (AP Photo/Chuck Burton, File)

Line: Baylor by 2 1/2, according to FanDuel Sportsbook.

Baylor can solidify its place as Big 12 title contender with a win over Texas that would also bury the Longhorns' hopes. First-year Texas coach Steve Sarkisian must find a win to back up the promise that consecutive fourth-quarter collapses didn't end the Longhorns' league title dreams.

Baylor running backs Abram Smith and Trestan Ebner vs. the Texas linebackers. Smith and Ebner together ran for 283 yards in pounding BYU two weeks ago. Texas has surrendered an average of 296 yards rushing in their three losses and wears down late.

Texas linebacker DeMarvion Overshown returns from concussion protocol. He's Texas' best defensive player. Even if he's too light to hold up all game against a pounding rush attack, Texas needs a speedy disrupter who can make some plays rushing the quarterback or chasing sideline to sideline.

Baylor quarterback Gerry Bohanon shoulders bigger expectations every week. The run game is Baylor's go-to until Bohanon picks apart a secondary for touchdowns. He has 12 scoring tosses against one interception this season. Another efficient game from him and the Bears will be rolling.

Baylor had no penalties in a win over BYU, the first time that's happened in school history. ... Over his last nine games, Texas running back Bijan Robinson has scored 19 touchdowns ... Baylor linebacker Dillon Doyle is the first player in program history to record a rushing touchdown, a receiving touchdown and a sack in the same game (BYU).