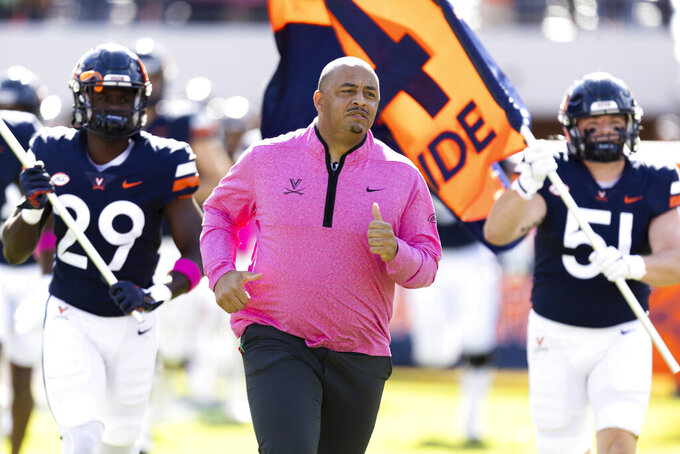 North Carolina has put itself in firm command of the Coastal Division standings.

The No. 17 Tar Heels (7-1, 4-0 Atlantic Coast Conference) are at least two games up in the loss column on each of the other six division teams. They've had road wins at Miami and Duke – the teams closest behind them in the standings.

A win at Virginia (3-5, 1-4) would push UNC to its first 5-0 start in league play since going 8-0 in 2015, during the lone appearance in the ACC championship. But coach Mack Brown said the team hasn’t spent a lot of time talking about the Coastal chase.

The Tar Heels' high-powered offense has been key this year, and they lead the ACC with an average of 41.8 points. Virginia is holding opponents to 21.5 points, fifth best in the league. Virginia's defense hasn't allowed a touchdown in its last two games.

“The guys are taking the coaching,” Elliott said. “They’re applying the coaching. They’re getting better every single day. They’re finding ways to get to the quarterback whether it’s winning one-on-ones or pushing the pocket so that their teammates can have success ”

Here are things to watch when North Carolina visits Virginia:

UNC second-year quarterback Drake Maye has been nothing short of brilliant in his first season as the starter.

He is tied with Ohio State’s C.J. Stroud for the Bowl Subdivision lead with 29 touchdown passes. He is third in FBS in passing yardage (333.9) and passing efficiency and thrown just three interceptions on 275 attempts. He’s also had three games with five TD passes this season, including last week’s 388-yard day against Pittsburgh.

Virginia QB Brennan Armstrong had struggled while trying to adapt to the more balanced offense preferred by Elliott and offensive coordinator Des Kitchings. After throwing for 4,449 yards with 31 TDs last season, the lefthander has just 1,826 yards and six TDs this year.

“The areas where Brennan still has to work is trust your protection and go through your progressions, step up, deliver the ball. As opposed to looking to break the pocket too quickly,” Elliott said.

Armstrong has carried the ball 101 times for 353 yards and four TDs.

North Carolina remains one of the nation’s worst defenses by allowing 462.6 yards (121st in FBS) and 31.4 points (110th). But Brown and defensive coordinator Gene Chizik see signs of improvement. UNC has allowed just 23.3 points per game in its ACC wins.

“I feel like we are getting better every week,” Chizik said.

Maye’s success has come in part through strong play at receiver.

Antoine Green has developed into a reliable second target opposite Josh Downs, who was one of the FBS receiving leaders last season. Green had career highs of 10 catches for 180 yards and two TDs in the win against Pittsburgh and that followed 112 yards with the go-ahead late TD grab in the win at Duke. Downs had 11 catches for 102 yards and two scores against the Panthers, coming off a 126-yard day against Duke.

Those performances were the first time in program history a duo had each cracked the 100-yard mark in consecutive games.

Elliott thinks his receiving corps provides good preparation for the challenge ahead.

“I feel like they get challenged every single day on our practice field with the guys that we have,” he said. ”I think the potential that we have in the receiver room of our own is very similar to what those guys have."