No. 2 Irish hope to build ACC, CFP resume against Orange 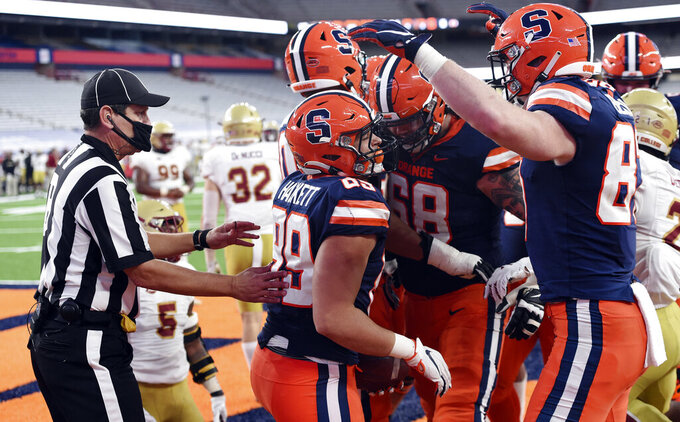 SOUTH BEND, Ind. (AP) — The script has been rewritten off and on for No. 2 Notre Dame in a year dominated by the pandemic, but the overall goal remains the same for Brian Kelly and his team: win two championships.

The Fighting Irish (9-0, CFP No. 2) ended 131 years as a football independent to join the Atlantic Coast Conference for this season, can earn their ninth ACC victory Saturday against Syracuse (1-9, 1-8 ACC). The game is at Notre Dame Stadium, where the Irish have won 23 straight.

Kelly knows Notre Dame, riding the nation’s longest winning streak at 15, needs to take care of business against coach Dino Babers’ youthful Orange before it looks to its future later this month. There is the ACC title game Dec. 19 and there is a possible berth in the College Football Playoff.

“I think the most important thing for us is to carry on the play that we exhibited in the second half of the game against North Carolina,” Kelly said of last week's 31-17 victory in Chapel Hill.

“Arguably our best two quarters of the season will be what we talk about all week in our preparation,” Kelly said.

Earlier this week, the ACC announced Notre Dame would not have to play its re-scheduled Dec. 12 game at Wake Forest, giving the Irish a week to get healthy and prepare for its ACC title game opponent – either No. 4 Clemson or No. 9 Miami.

“It’s really about preparing and putting together the kind of performance that needs to be consistent if you are really entertaining thoughts about being a championship football team,” he said.

Babers knows what awaits his rebuilding Orange, with nearly three of every four players are in their first two years of eligibility.

“The way (Book) keeps plays alive is amazing,” Babers said. “No one has run the ball against Notre Dame. We know where we’re at, and we get to lace them up one more time.”

Notre Dame and Syracuse have met nine times, the last time in 2018 at Yankee Stadium when the unbeaten Irish romped 36-3 late.

“I’m glad we got to play those guys again,” said Syracuse senior wide receiver Nykeim Johnson, who had two receptions in the game. “Definitely going to be on a big stage.”

“You’re getting an opportunity to play at Notre Dame – ‘Touchdown Jesus’ and the whole nine yards,” Babers said.

Syracuse is surrendering 453.5 yards and 31.5 points per game But not all is grim.

“They’re athletic, they’re fast, they play with toughness, they take the football away … they get your attention,” Kelly said.

Despite freshman Sean Tucker’s 525 team-leading rushing yards, Syracuse only averages 78.3 yards per game on the ground, 250.4 yards overall and 17.5 points per game. Last week, Syracuse quarterback Rex Culpepper threw for 254 yards and two touchdowns against N.C. State. Junior receiver Taj Harris had a career day with 13 receptions for 146 yards and one score.

Babers can only wish he had Notre Dame’s rushing attack. Led by sophomore Kyren Williams (No. 7 nationally with 901 yards), Notre Dame averages 229.7 yards per game (16th) thanks to its impressive offensive line led by tackle Liam Eichenberg and guard Aaron Banks and a quartet of blocking tight ends.

“They line up next to each other and they look like a bunch of redwood trees blocking out the sun,” Babers said.

“My superhero as a kid and right now,” said Williams after his 124-yard rushing performance. “Seeing the way everybody looks at him and how he’s changing the world, it’s something that I will never forget and will always be grateful for.”