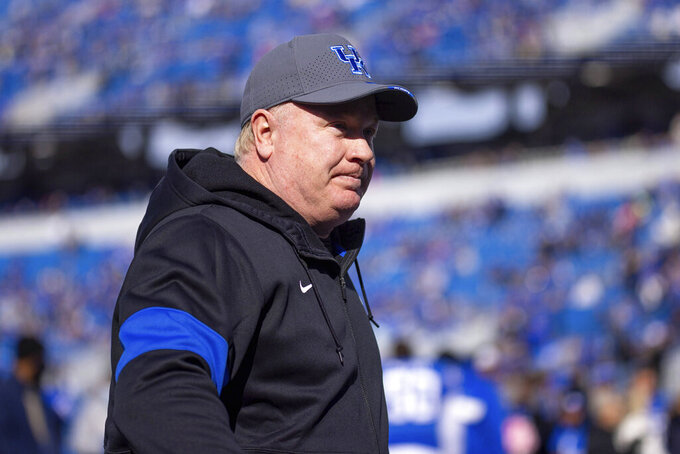 LEXINGTON, Ky. (AP) — Mark Stoops could reach a milestone Saturday night against the same school that gave him his first collegiate coaching victory.

Of course, that strange coincidence doesn't mean all that much to Stoops. He is focused on beating Miami (Ohio), just as he was when he took over Kentucky in 2013. The only difference now is the bar is higher for the Wildcats.

“It does seem like a long time ago, but grateful,” said Stoops, who can match Paul “Bear” Bryant for the top spot on the school's career wins list with his 60th victory in the opener. “A much different team. (You) just try to stay in the moment, stay in our normal routine, and get the team ready to play.

“Obviously, I want more, want more success, want more victories and want to continue to get the program to higher heights.”

Stoops enters his 10th season as Kentucky’s longest-tenured coach with heightened expectations for his No. 20 Wildcats. Coming off their second 10-win season in four years, they received their first preseason ranking since 1978, along with projections of finishing second behind defending national champion Georgia in the Southeastern Conference East Division.

That leaves no room for error — especially with next week's SEC opener at Florida looming — but Stoops believes his team is ready for the challenge. Kentucky's 13 returning starters includes senior quarterback Will Levis, who has been mentioned as a potential top-10 selection in next year’s NFL draft after passing for 2,827 yards and 24 touchdowns last season.

The Wildcats will be missing leading rusher Chris Rodriguez Jr. (1,379 yards, nine TDs), who pleaded guilty in July to driving under the influence. Stoops said Rodriguez is unavailable rather than suspended, but he likely faces a multigame suspension next week along with several teammates for undisclosed reasons.

Miami enters with lofty expectations after a 7-6 season capped by a win in the Frisco (Texas) Football Classic.

“You like it that way because you have to go beat these guys,” Stoops said of the challenge. “They’re not going to give it to you.”

Kentucky begins a tough opening stretch for Miami, which visits No. 23 Cincinnati and Big Ten member Northwestern among its first four games. It's nothing new for the RedHawks, and coach Chuck Martin said his squad relishes another early test.

“Our preparation has been really good,” Martin said this week. “We’ve played a lot of games like this. They’re exciting, they’re fun. It’s a great opportunity.”

“He’s athletic, he’s experienced and can make all the throws,” Stoops said of Gabbert. “Just a good football player.”

Rodriguez’s absence creates a bigger opportunity for senior Kavosiey Smoke, a speedy 1,300-yard career rusher who has broken some big plays at Kentucky. The program also landed transfer Ramon Jefferson, who rushed for 1,907 yards in 22 games for Sam Houston State. Jefferson is listed as the backup.

Those backs and Levis will be protected by a reconfigured “Big Blue Wall” of offensive linemen. The left side is the biggest concern, where redshirt freshman David Wohlabaugh Jr. is the listed starter at tackle ahead of true freshman Kiyaunta Goodwin. Jager Burton will start at guard ahead of Kenneth Horsey, who Stoops said this week has been hurting.

Miami linebacker Ryan McWood will begin his seventh season after missing 2021 with an injury. He led the Red Hawks with 99 tackles in 2019 before the pandemic cut next season to just three games.

Kentucky leads 8-4-1 in the series and has won the past three meetings. The Red Hawks seek their first win in Lexington since 1979, when they rallied from a 14-point deficit for a 15-14 victory.