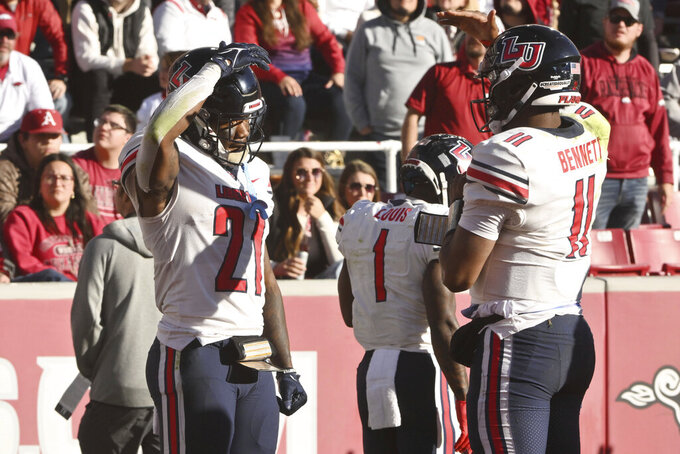 FAYETTEVILLE, Ark. (AP) — Liberty coach Hugh Freeze said it might have been the biggest win of his career. Arkansas’ Sam Pittman knew it was his worst loss.

No. 23 Liberty picked up its first win over an SEC school just five years after its entry to FBS on Saturday, making a goal-line stand with 1:11 left to beat Arkansas, 21-19.

Razorbacks quarterback KJ Jefferson had found Trey Knox for a jumping touchdown reception with 1:11 left to pull Arkansas within two. He took a shotgun snap up the middle on the ensuing 2-point conversion attempt, but was stuffed at the goal line. The ball made it over, but only after his knee touched the ground as officials studied the replay for more than two minutes. The boos came shortly thereafter.

The win was Freeze’s first in Fayetteville after he spent two seasons as an assistant at Ole Miss and five more as a head coach from 2012-16.

“To come into an SEC stadium, I know it’s hard as heck to bring an SEC roster to a stadium on the road in this league,” Freeze said. “It’s hard. I lived it. To bring our Group of Five roster in here to win, be hard-pressed to say this is not 1A or 1B.”

The Independent Flames’ only loss this season came by one point against top 25-ranked Wake Forest in Week 3.

Liberty quarterback Johnathan Bennett did most of the work offensively. He went 15 of 25 passing for 224 yards with three touchdowns, all of which came in the first half as Liberty built a 21-0 lead. Demario Davis had more than half of those yards, picking up 145 on seven catches with one of the scores.

The Flames’ defense held Arkansas’ sixth-ranked rushing attack to 144 yards, 100 short of its season average. They also racked up 14 tackles for-loss, leading to negative-57 yards for the Razorbacks.

Arkansas scored 16 of its 19 points in the second half after Cam Little’s 50-yard field goal with time expiring in the first half kept the Razorbacks from a first-half shutout. Quincy McAdoo blocked a punt out of the back of the end zone for safety in the third quarter and Jefferson led Arkansas on two fourth-quarter touchdown drives.

Jefferson finished 23 of 37 passing for 284 yards with the two touchdown passes, both to Trey Knox, but also threw two interceptions. The first of those came when he sought Knox in the end zone in the second quarter. Instead, the ball hit his tight end and went into the arms of a Liberty defender. Bennett led Liberty on an eight-play, 80-yard scoring drive in response to give the Flames a 21-0 lead.

Jefferson entered with the second-highest quarterback rating in the SEC.

“Obviously he didn’t play as well as what he had,” Pittman said. “He was busting his butt down there at the end, making plays and trying to get us to overtime. He just didn’t throw the ball as well as he normally does.”

Liberty could top its best FBS record if it wins its remaining three games. The Flames went 10-1 during the COVID-19 season of 2020 and beat Coastal Carolina in the Cure Bowl.

Arkansas is a one away from bowl eligibility after winning eight regular-season games last year. Ranked opponents LSU and Ole Miss visit Fayetteville next before the Razorbacks finish at Missouri in a trophy rivalry game. Pittman is aware of the pressure.

Arkansas didn’t have a drive go for more than 45 yards in the first half and punted on five of its first six. Liberty scored all of its points in the opening half-hour.

“I’ve brought a lot of good teams to this stadium, I’ve never left here real happy,” Freeze said. “Who would have thought my first win in Fayetteville would have been with Liberty?”

Liberty could jump a couple spots after beating an SEC opponent.

Arkansas picked up votes last week, but is unlikely to get that result again.

Liberty’s lone loss came by one point to Wake Forest in Week 3. The Flames may be the best non-power-conference team in FBS.

Arkansas’ bowl-eligibility hopes are in trouble as the Razorbacks face ranked opponents the next two weeks before finishing in a rivalry game against Missouri.

Liberty: The Flames play at Connecticut in Week 12

Arkansas: The Razorbacks get another home game when LSU visits Saturday.