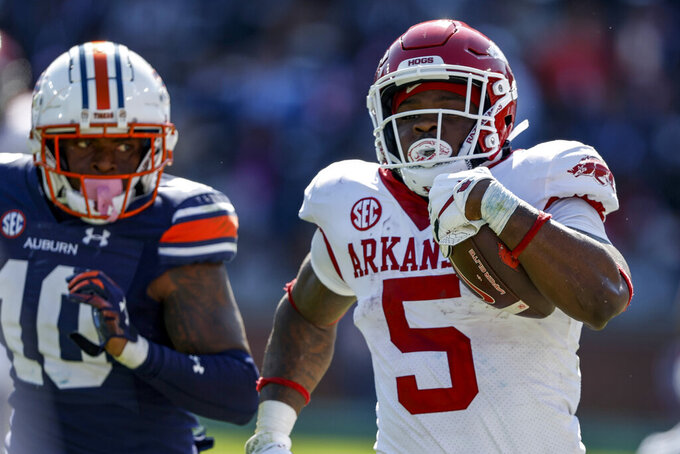 Arkansas running back Raheim Sanders (5) carries the ball as Auburn safety Zion Puckett (10) tries to catch him during the second half of an NCAA college football game Saturday, Oct. 29, 2022, in Auburn, Ala. (AP Photo/Butch Dill)

Line: Arkansas by 13 1/2, according to FanDuel Sportsbook.

Liberty sits 7-1 with four games left and Arkansas is the biggest obstacle left on the schedule. If the Flames win out, they'll be in position for a Group of Five invitation to a New Year’s Six bowl game. On the flip side, the game is high-risk, low-reward for Arkansas. Lost a home nonconference matchup would be a setback for a team hoping to ride momentum into its final three SEC games.

The Flames’ run defense gives up just 123.2 yards per game and will go against the nation's No. 6 rushing offense. Arkansas, led by the SEC leading rusher Raheim “Rocket” Sanders, is best when it controls the line of scrimmage and runs effectively. Opponents have only scored nine rushing touchdowns against the Flames. The Razorbacks have found the end zone 18 times on the ground.

Liberty: RB Dae Dae Hunter has racked up 821 yards and eight rushing touchdowns in eight games. His most recent outing against BYU was his best, with 213 yards on 23 carries, including an 80-yard touchdown.

Arkansas: QB KJ Jefferson has been a dynamic playmaker with his arm and legs. In Arkansas’ last two games, against BYU and Auburn, Jefferson threw for a combined six touchdowns and ran for two scores. He has thrown just one interception and owns the SEC's second-best quarterback rating (170.3).

A win would make Arkansas bowl-eligible for the third straight season, something the program hasn’t accomplished since 2014-16. ... Liberty is 0-2 all-time against the SEC, most recently losing 27-14 at Ole Miss in 2021. … Liberty HC Hugh Freeze is 0-2 all-time in games against Arkansas played in Fayetteville. ... Sanders is sixth in the FBS with 1,041 yards rushing. ... Arkansas coach Sam Pittman is 8-0 in nonconference games.