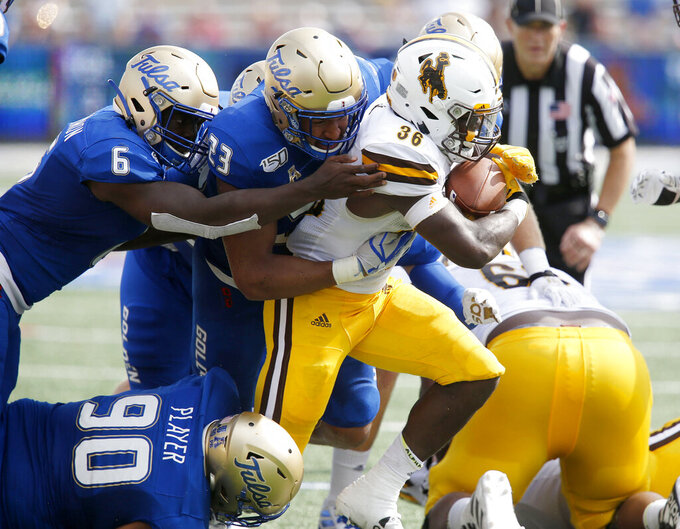 SMU plays its first game as a ranked team in 33 years, going against the team that beat the Mustangs in the season finale last season to keep them from becoming bowl eligible. Tulsa won that season finale 27-24, and the Mustangs finished 5-7 in coach Sonny Dykes’ first season. SMU’s last ranked game at home was Oct. 18, 1986, when they were No. 20 _ the AP ranked only 20 teams then _ and beat Houston 10-3. The Mustangs moved up two spots the next week but then fell out after a Southwest Conference loss at Texas.

SMU receivers James Proche and Reggie Roberson Jr. against the experienced Tulsa secondary. Proche had 11 catches for 183 yards against Tulsa last season, and leads the American Athletic Conference this year with 6.8 catches per game. His 75.2 yards receiving per game are second on the team to the league-leading 102 per game by Roberson. The Golden Hurricane have four senior starters in the secondary, including a nickel back.

Tulsa: RB Shamari Brooks has averaged 104.7 yards rushing with four touchdowns the past three games since being stifled for zero yards on six carries in the opener at Michigan State.

SMU: QB Shane Buechele, the grad transfer from Texas who still has another full season of eligibility in 2020, is the American’s top passer at 277 yards passing per game. RB Xavier Jones leads the league with 105 yards rushing per game and 10 touchdowns.

SMU has scored at least 40 points in each of its last four games. ... Tulsa is 4-1 against the Mustangs since they have been in the AAC together. ... The 26th meeting overall in the series comes exactly 84 years after the first on Oct. 5, 1935. ... The Mustangs set a school record with 10 quarterback sacks against USF last week.