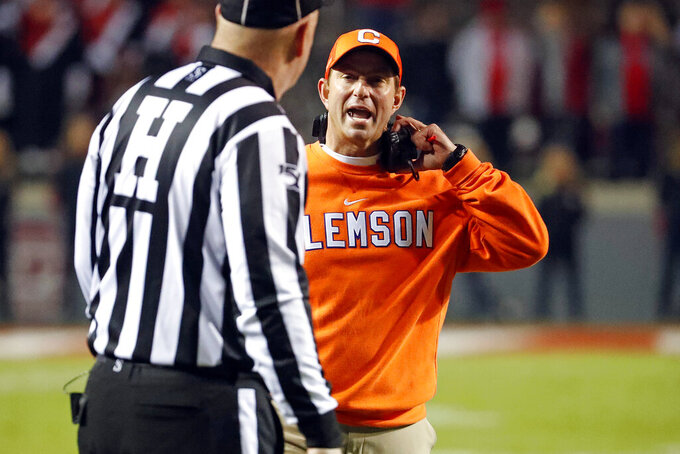 Clemson head coach Dabo Swinney speaks with an official during the second half of an NCAA college football game against North Carolina State in Raleigh, N.C., Saturday, Nov. 9, 2019. (AP Photo/Karl B DeBlaker)

CLEMSON, S.C. (AP) — Clemson’s week off in early October was filled with questions and a fall from No. 1 in the rankings. Six weeks later the third-ranked Tigers feel they are in a much better place, prepping for the College Football Playoffs.

Clemson (11-0; No. 3 CFP), which headed into the first of its two off weeks after a 21-20 close call at North Carolina, comes into this break enjoying six consecutive dominating victories in which they’ve outscored opponents by an average score of 52-9. The defense, ranked second nationally in yardage allowed, is the only FBS program to hold all 11 teams it’s played to under 300 yards.

Quarterback Trevor Lawrence has thrown for 19 touchdowns and just three interceptions since win against the Tar Heels. He had just eight TDs with five picks in Clemson’s first three games. During the Tigers’ dominant run, tailback Travis Etienne became the first in Clemson history with six straight games rushing for 100 yards or more.

“We’re definitely where we want to be, playing well, playing together as a team,” the quarterback said.

Clemson coach Dabo Swinney agrees and is confident his team will continue preparing for the next steps ahead.

The Tigers will go for their sixth straight win over South Carolina, their longest streak since Clemson’s Depression Era run of seven in a row from 1934-40. After the matchup with the Gamecocks, Clemson will attempt to become the first Power Five team to win five straight conference championship games when it plays for the Atlantic Coast Conference crown on Dec. 7.

If Clemson can get through those contests unscathed, the Tigers are expected to be part of the playoff field for a fifth straight season with the chance to win a second straight national championship and their third in four years.

“Love our focus, love the edge that we’re playing with and that’s what it’s going to take to finish the way we want,” Swinney said.

That wasn’t the case six weeks ago when the Tigers entered the break a wounded program after getting out of Chapel Hill with a win. Clemson needed to stop a potential game-winning two-point conversion attempt by North Carolina in the closing minutes to remain perfect.

Clemson won, but the victory felt as though the Tigers had lost.

The Tigers fell from its No. 1 ranking they had held since the preseason. Lawrence’s mistakes were magnified and regularly analyzed, with suggestions and concerns coming from all directions. There were even reports of Lawrence having an injury that affected his arm strength.

Swinney angrily shot down questions on Oct. 9 regarding Lawrence’s health.

“There’s nothing wrong with Trevor. And I don’t like people trying to create drama. There’s no drama on this team,” the coach said.

And if there were, there are not anymore.

“Just the chemistry we have and the belief in ourselves,” said Etienne, a junior who’s run for 1,335 yards and an ACC-leading 14 touchdowns. “We block out the outside noise and don’t really care what anyone has to say about us because we know what we have inside the locker room and the bonds we have with each other.”

Swinney said Clemson will work, on strengthening those bonds through the off week with a few practices and a career fair where companies will visit campus and talk opportunities with players who’s futures won’t include the NFL.

“It’s something we take a lot of pride in,” Swinney said.

Lawrence remembers hating any off weeks in high school. He understands that in college, it’s necessary to recharge and heal from the stress of practice and the hard hits from games.

Swinney is grateful for the break. He knows his players won’t slacken their work ethic with the postseason so close.

“It wouldn’t matter if we’re playing this week or next week or in two weeks,” Swinney said. “We’re going to be ready to play.”