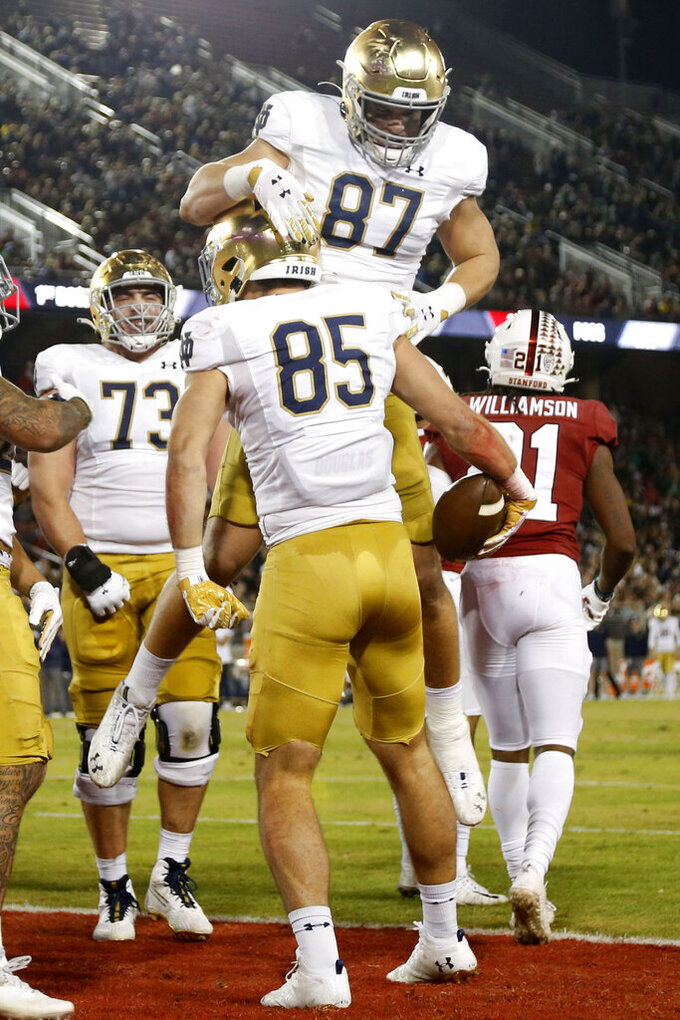 Notre Dame's George Takacs (85) celebrates with Michael Mayer (87) after catching a touchdown pass against Stanford during the first half of an NCAA college football game in Stanford, Calif., Saturday, Nov. 27, 2021. (AP Photo/Jed Jacobsohn)

STANFORD, Calif. (AP) — Notre Dame did its job and now all the Fighting Irish can do is wait.

Jack Coan threw two touchdown passes and ran for another score and No. 5 Notre Dame finished off the regular season with a 45-14 victory over Stanford on Saturday to keep its playoff hopes alive.

“We controlled what we needed to control and that was to play really good football on offense, defense and special teams over the past six, seven weeks," coach Brian Kelly said. "We’ve done that. So we made our case. We'll now sit back and see what other people think. But we got one of the best four teams without question in my mind. We’re ready to prove it.”

The Irish (11-1, No. 6 CFP) won their final seven games following a home loss to Cincinnati but will likely need some help next week to get into the College Football Playoff for the third time in the past four seasons.

“We did what we could with the games we had left,” tight end Michael Mayer said. “So now we kind of just sit and wait. I really believe that we’re one of the best four teams in the nation.”

Stanford (3-9) lost its seventh straight game to end the season following an upset of then-No. 3 Oregon for its longest losing streak and most losses in a season since a 1-11 campaign in 2006. The Cardinal were outscored 173-46 over the final four games.

“There are some things here that we’ve done extremely well in the past that we need to do better,” coach David Shaw said. “Some things we got to tweak and change. So we’re not going to be stagnant and rest on the things we did in the past. We’re going to get back to work, continue this recruiting process, which has gone extremely well, recruiting the right guys to the right place, and get to the point where we take out the bumps in our road.”

This game wasn’t competitive from the start as the Irish forced a three-and-out on the first possession and answered with a 74-yard drive capped by Coan’s 16-yard TD pass to Braden Lenzy.

Coan added another TD pass to George Takacs and the Irish built a 24-0 halftime lead. He finished 26 for 35 for 345 yards with the 1-yard TD run in the third quarter.

Jonathan McGill intercepted Coan’s pass on the first drive of the second half to set up a 13-yard drive capped by Austin Jones’ 5-yard run. That ended Notre Dame’s streak of not allowing a TD at 219:17 of game action since North Carolina scored in the fourth quarter on Oct. 30.

“We weren’t focusing on that,” defensive lineman Justin Ademilola said. “We just knew that we wanted to dominate our opponent.”

Notre Dame: The Irish are peaking at the end of the regular season even if the competition hasn't been the stoutest. Notre Dame outscored its four opponents in November by a score of 162-23 but whether that's enough to make the playoff may depend on what happens next weekend in the conference championship games.

Stanford: The Cardinal head into the offseason with serious questions about the direction of the program after their worst season in 15 years. Shaw had built Stanford into a powerhouse last decade but the Cardinal are 11-19 the past three seasons.

“It’s not what happens to us but how we respond,” Shaw said. “This program will respond.”

Mayer had nine catches for 105 yards, giving him 64 catches on the season. That breaks the school single-season record for tight ends of 63 set by Tyler Eifert in 2011.

The Cardinal have been unable to generate anything offensively the last month of the season as they have fallen in deep holes each game. In the final four first halves of the season, Stanford averaged 77.5 yards of offense and was outscored 90-3.

The Cardinal had one big play against the Irish with Isaiah Sanders hitting Benjamin Yurosek on a 44-yard TD pass on a trick play in the second quarter only to have it wiped off by an illegal block.

Notre Dame: The Irish will wait to find out their bowl fate.

Stanford: The Cardinal prepare for 2022.