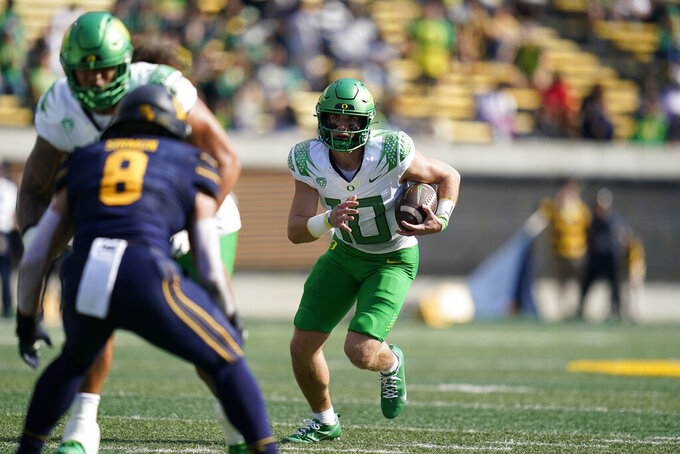 Oregon quarterback Bo Nix (10) runs the ball against California during the first half of an NCAA college football game in Berkeley, Calif., Saturday, Oct. 29, 2022. (AP Photo/Godofredo A. Vásquez)

Line: Oregon by 31 1/2, according to FanDuel Sportsbook

The Ducks have won seven straight since a 49-3 loss to No. 1 Georgia in the season opener. They’re averaging more than 40 points over the streak, with Bo Nix leading the charge. The transfer quarterback seems set for another monster game against a Buffaloes defense allowing 483.8 total yards per game. Jayden de Laura of Arizona threw for 484 yards on Colorado and Arizona State quarterback Trenton Bourguet went for 435 yards last weekend. Nix enters as the league’s reigning offensive player of the week after his six-touchdown performance against Cal (three passing, three rushing). Nix has 31 total scores and leads the league with 11 rushing touchdowns.

Another step toward a fourth straight conference championship for the Ducks. In addition, a climb in the CFP rankings. They’re the top Pac-12 team in the current CFP rankings, just ahead of Southern California. The Ducks have won eight of nine against the Buffaloes, who are 1-2 under interim coach Mike Sanford.

Finding some way to slow down Nix and Oregon’s high-powered offense. The Ducks are third in the nation in total offense (525.8 yards per game) and average 7.15 yards per play. Colorado linebacker Josh Chandler-Semedo has 43 tackles and been a part of seven tackles for loss and over his last four games.

Oregon: Cornerback Christian Gonzalez, who’s playing against his former team. Gonzalez had a team-leading eight tackles for Oregon and a blocked field goal last weekend in a win at Cal. Gonzalez was a Pac-12 All-Conference honorable mention last season at Colorado before transferring.

Colorado: Freshman punt returner/receiver Jordyn Tyson had five catches for 115 yards and a 58-yard score against the Sun Devils. He also turned in an 88-yard punt return. His 246 all-purpose yards were the most by a freshman in program history.

Oregon is tied for the top spot in the nation in first downs with 28.4 per game. ... Nix is the lone FBS quarterback this season with double-digit TDs in both passing and rushing. ... Oregon averages 17.75 points in the second quarter, which leads the FBS. ... Oregon and USC are the only two FBS teams that have yet to lose a fumble. ... Colorado has had 19 different players catch a pass. ... Colorado is 4-33 against AP Top 25 teams since the team joined the league in 2011, according to Pac-12 research.