No. 9 Michigan yet to trail in a game with Huskers up next 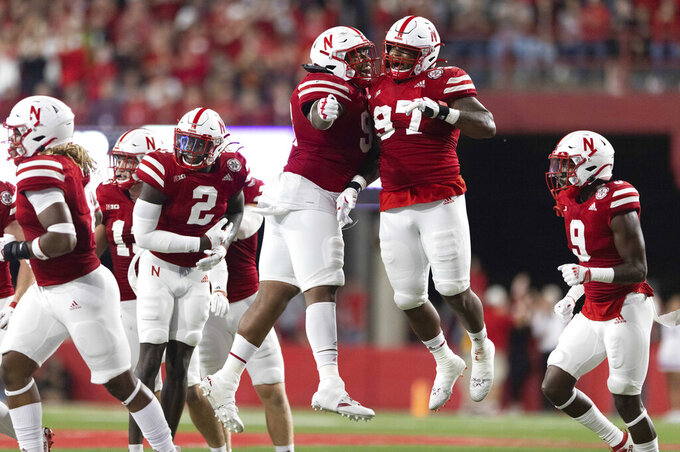 Line: Michigan by 3 1/2 points, according to FanDuel Sportsbook.

Michigan looks to keep its roll going with a defense yet to give up more than 17 points and the confidence it can achieve championship goals after falling short in previous seasons under Jim Harbaugh. Nebraska is looking for its first win against a ranked opponent under Scott Frost. The Huskers are feeling good about themselves after a resounding victory over Northwestern, but the Wolverines are an entirely different animal.

Nebraska offensive line vs. Michigan defensive line. The Cornhuskers had two new starters against outmanned Northwestern, and what had been an underperforming line cleared the way for 427 rushing yards and gave up no sacks. Michigan DE Aidan Hutchinson leads the Big Ten with 5.5 sacks and along with LB David Ojabo helps form a fearsome front seven.

Michigan: QB Cade McNamara makes his first road start at night in front of a big and hostile crowd. He handled Wisconsin's Camp Randall Stadium with no problem during the daytime last week. He attempted a season-high 28 passes and threw for two touchdowns. He hasn't thrown an interception or been sacked in 156 drop-backs. Memorial Stadium was juiced last week against Northwestern. It will be more so this week.

Nebraska: RB Jaquez Yant lost 25 pounds since the off-season and capitalized when he got his chance against Northwestern last week, breaking out with 127 yards on 13 carries. The Huskers need Yant to get going against the Wolverines to open up the passing game.

Michigan and Nebraska are among eight schools with more than 900 all-time wins. ... The teams have split four meetings since Nebraska entered the Big Ten in 2011. Michigan won the most recent matchup 56-10 at home in 2018. ... Nebraska is 0-9 against ranked opponents in Frost's four seasons. ... Michigan is 5-0 for the first time since the 2016 team opened 9-0. ... Wolverines have not trailed and have committed only one turnover this season. ... Nebraska is among four teams in the nation averaging 250 passing yards and 225 rushing yards per game.