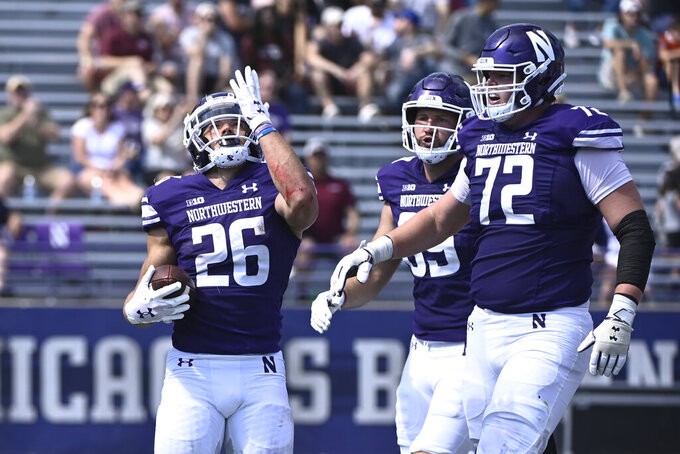 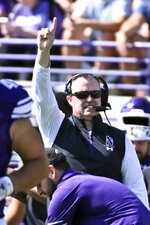 Line: Northwestern by 7 1/2, according to FanDuel Sportsbook.

Northwestern has dropped two straight since a season-opening win over Nebraska in Ireland, including a 31-24 stunner to Southern Illinois of the Football Championship Subdivision. The Wildcats are also staring at a tough one-two punch to open Big Ten play. They visit No. 14 Penn State next week and host Wisconsin on Oct. 8. Miami lost 38-17 at Cincinnati in the 126th Battle for the Victory Bell, giving the Bearcats 16 straight wins against their in-state rival and the series lead. The Redhawks open MAC play at Buffalo next week.

Northwestern RB Evan Hull vs. Miami ILB Ryan McWood. Hull leads the nation in all-purpose yards with 652, including 308 rushing and 301 receiving. McWood has been arguably Miami's best player with 31 tackles and one of the defense's four interceptions.

Miami: QB Aveon Smith. Smith figures to make his third straight start since Brett Gabbert exited a season-opening loss at Kentucky with an injury to his non-throwing arm. He was 9 for 21 for 116 yards with two touchdowns and an interception against Cincinnati.

Northwestern: Hull. Hull ran for 124 yards and a touchdown against Southern Illinois. Against Duke, he caught 14 passes for a career-best 213 yards and a TD. That made him the first Power Five running back this century with at least 14 receptions and 200 yards in a single game.

The programs are meeting for the first time since Northwestern's 16-6 win in 2009. ... Northwestern and Miami have some connections. Ara Parseghian and Randy Walker played at Miami and served as head coaches there before taking over at Northwestern. ... Miami is 0-7 against the Big Ten since coach Chuck Martin took over in 2014. The RedHawks' most recent win against the conference was 44-14 over Northwestern in 2003, when they went 13-1 and were ranked No. 10 in the final AP Poll with Ben Roethlisberger leading the way. ... Miami has held leads in 36 of its past 41 games. ... The RedHawks have been quick starters, winning all three coin tosses and scoring on each game-opening possession, including touchdowns at Kentucky and against Cincinnati. ... Northwestern was held to 380 yards last week after going for 528 against Nebraska and 511 against Duke. ... The Wildcats are averaging a league-low 16.6 points while giving up 29 per game — third-most in the Big Ten.