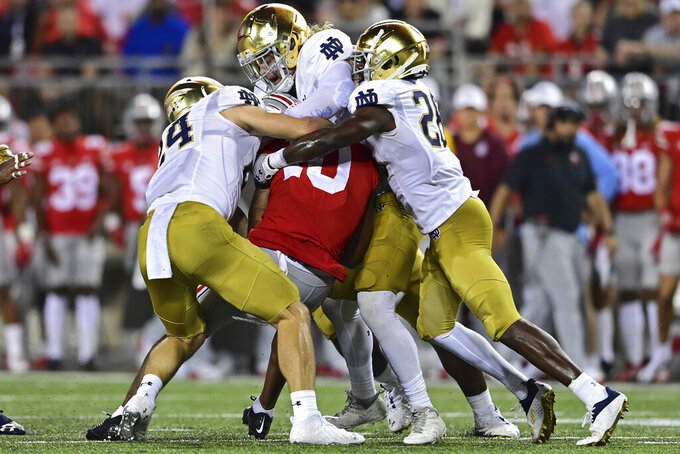 Sure, it's a chance for the eighth-ranked Fighting Irish to rebound from last week's season-opening loss at No. 2 Ohio State. And yes, it's also another chance for Freeman to earn his first win after two losses to top-10 opponents. The Irish also lost to No. 9 Oklahoma State in the Fiesta Bowl last January after he was promoted.

But perhaps no other moment in Freeman's career will feel quite the same as the first time he leads the Irish through the Notre Dame Stadium home tunnel on Saturday and onto the field against Marshall.

“It’s something you dream about," Freeman said. "Ever since I had been named head coach, I’ve been looking forward to this moment.”

There will be plenty of other firsts for Freeman and the Irish.

The two schools have never met on the football field and Freeman and second-year Marshall coach Charles Huff will become the first Black coaches to square off in stadium history.

It's a moment that isn't lost on either team.

“From the outside perspective, this is a huge game,” Huff said. “I know everybody’s excited. From the historical piece of it and the place we’re going, all that’s great. The reality of it is this game has no bearing on what our ultimate goal is.”

Instead, both coaches are focused on football.

Marshall (1-0) did all that without Rasheen Ali, last year's top freshman rusher in the Bowl Subdivision. He's been out since mid-August while he deals with an undisclosed personal issue and will not play Saturday.

Freeman, meanwhile, wants to see his run defense perform better than it did while giving up 172 yards to Ohio State. The former defensive coordinator knows Notre Dame (0-1) can't afford a repeat if it hopes to even its record and celebrate Freeman's first victory, especially against Huff's squad.

“If you work hard and do things the right way, there is no cap to where you can go in this profession of coaching,” Freeman said. “Credit to coach Huff and where he has come from and the job he has done. Hopefully, the focus is obviously on the game, but it’s a great representation of minority coaches in the coaching profession.”

The oddsmakers may not recognize it, but Marshall is not just a middling Group of Five opponent. It's a program on the move.

The Thundering Herd went 7-6 last season and in their 55-3 Week 1 victory the defense allowed only five first downs, 114 total yards and posted two takeaways. Now, in their first season in the Sun Belt Conference, Huff's team has a chance to make a national statement.

“This game is just as important to us as Norfolk,” he said. “That’s no disrespect to Notre Dame. That’s not coach talk. That’s just the way you have to prepare in order to be consistent.”

Freeman understands what the Irish are up against and he can point to recent history against Group of Five teams to emphasize the point. Last year, the Irish escaped with a 32-29 victory over Toledo and in 2018 they squeaked past Ball State 24-16.

The Irish also should get a boost from the return of All-American left guard Jarrett Patterson. The fith-year senior missed last week’s game with a sprained right foot.

Patterson’s presence, with 34 career starts, should help stabilize an offensive line that struggled in the second half against Ohio State.

“Jarrett has practiced every day,” Freeman said, referring to one of the team’s captains. “We are expecting him to play on Saturday unless something crazy happens. He’s had a good week of practice.”

Notre Dame spent eight months preparing for the Buckeyes — then had to cope with the emotional cost of losing 21-10 after leading at halftime.

But Freeman made this week's message clear and simple: Stay focused on Marshall.

“They’ve got good players and talent. They have good coaches,” defensive lineman Rylie Mills said. “So you can’t come off (last week’s) game and let the preparation waver.”