Oklahoma RB Brooks back after sitting with COVID-19 concerns 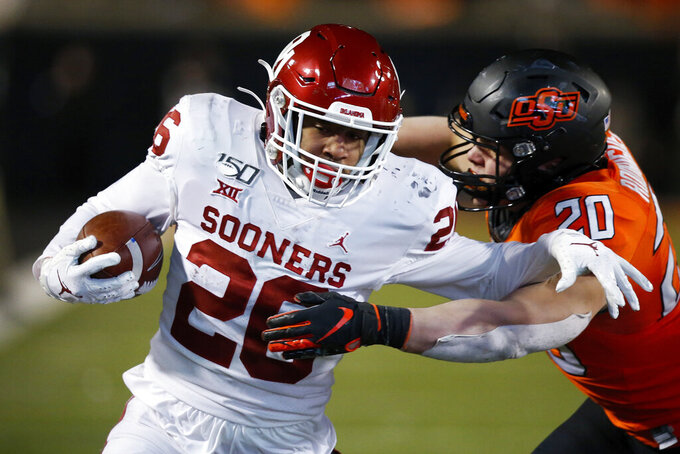 FILE - Oklahoma running back Kennedy Brooks (26) tries to get past Oklahoma State safety Malcolm Rodriguez (20) in the second half of an NCAA college football game in Stillwater, Okla., in this Saturday, Nov. 30, 2019, file photo. Kennedy Brooks returns after sitting out last season with COVID-19 concerns. He's vaccinated now, and ready to roll. (AP Photo/Sue Ogrocki, File)

Oklahoma running back Kennedy Brooks maximized his time while sitting out last season due to COVID-19 concerns.

Brooks, who rushed for 2,067 yards and 18 touchdowns his first two years with the Sooners, refined his game while Oklahoma compiled a 9-2 season that ended with a Cotton Bowl win over Florida.

Now that he’s vaccinated, he’s ready to jump back into action.

“I’d probably say I’m more explosive than I was a year ago,” Brooks said. “Definitely worked on my strength and my first step. Also catching the ball. I worked on everything -- my strengths and my weaknesses. It’s all coming together. I’m going to take it day by day and stay consistent.”

Brooks adds his smooth running style to an offense that features Heisman candidate quarterback Spencer Rattler. As a freshman, Brooks ran for 1,056 yards and 12 touchdowns and averaged 8.9 yards per carry. The next season, he ran for 1,011 yards and six scores and averaged 6.5 yards per attempt.

He comes back with a different perspective. He said he saw things more like a fan when he watched games on television.

“It was kind of frustrating,” he said. “I could kind of see the side where they want the teams to do certain things and it’s hard when you’re not out there doing it. It was fun seeing it from a certain point of view.”

He also worked on the mental game, considering how he would handle various situations.

“It was more going on what the defense was doing, how they were rotating, what the coverages were, how they set up with blitzes coming,” he said.

Brooks hasn’t had much contact since the 2019 season, but he feels he already has shaken off any rust.

“I totally feel comfortable,” he said. “This is something I’ve been doing for a very long time. There are always things to improve on. I’m always going to be able to get better. But at the same time you’re just comfortable when you play the game of football for so long.”

Brooks is needed because the position has been hit with numerous issues. Last year’s top rusher, Rhamondre Stevenson, has moved on to the NFL. TJ Pledger transferred to Utah and Seth McGowan and Mikey Henderson are no longer with the program after having legal issues.

Brooks likely will split time with Eric Gray, a transfer from Tennessee, and Marcus Major.

Gray rushed for 772 yards last season and caught 30 passes for 254 yards. He gained 1,680 yards from scrimmage in two seasons with the Volunteers.

“He’s a great competitor,” Brooks said. “He goes out there and gives it his all. He can catch the ball, runs well. He’s explosive. He does everything right.”

Gray's approach has left an impression on Brooks.

“He’s definitely taught me a lot about the receiving game, about making people miss,” Brooks said. “From my perspective, he has helped me in taking every play and making it just that one play and nothing more.”