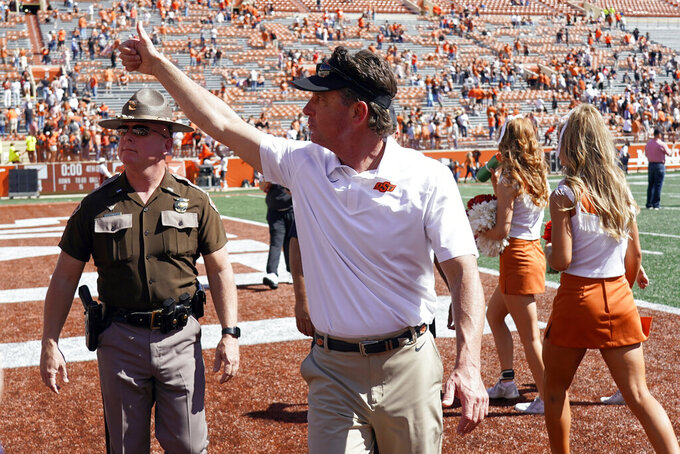 Oklahoma State coach Mike Gundy has agreed to a new contract that will keep him on a perpetual five-year deal at his alma mater.

The OSU/A&M Board of Regents has approved the recommendation from Oklahoma State president Dr. Kayse Shrum and Oklahoma State athletic director Chad Weiberg. The school announced the agreement Friday in a news release that stated further terms will be provided at a later date.

Gundy has a career record of 143-67 in 17 seasons and has led the program to 15 consecutive bowl games. The 54-year-old former Oklahoma State quarterback has coached the Cowboys to four New Year’s Six bowl games since 2010, and the Cowboys have reached The Associated Press Top 10 poll in 10 seasons since 2008, including this season.

The eighth-ranked Cowboys take a 6-0 record into Saturday’s game at Iowa State.

“Coach Gundy has elevated the Cowboys to among the most consistent winners in college football during his 17-year tenure at Oklahoma State University,” Weiberg said. “The numbers speak to our program’s success under his leadership.”

“Stillwater is home, and I love this community and Oklahoma State,” Gundy said. “Coaching my beloved alma mater is a great honor for me. I look forward to working with my outstanding coaching staff to continue having a positive impact on the lives of the players and their families who allow us the privilege to help them succeed on the field and in life.”

In June 2020, running back Chuba Hubbard, who now plays for the NFL’s Carolina Panthers, lashed out at him on social media for wearing a T-shirt promoting a far-right news channel. Hubbard, who is Black, suggested he might boycott the program after Gundy was photographed wearing a T-shirt promoting the One America News Network, a cable channel and website that has been critical of the Black Lives Matter movement and praised by then-president Donald Trump.

Gundy apologized for the impact of his choice to wear the shirt.

“Our players expressed their feelings as individuals and as team members,” he said at the time. “They helped me see, through their eyes, how the T-shirt affected their hearts,” Gundy said. “Once I learned how that network felt about Black Lives Matter, I was disgusted and knew it was completely unacceptable to me. I want to apologize to all members of our team, former players and their families for the pain and discomfort that has been caused over the last two days. Black lives matter to me. Our players matter to me.”

Hubbard’s initial Tweet got support from other Black players and former Black players, leading to an internal review. Then-athletic director Mike Holder released a statement saying it found “no sign or indication of racism” in the football program, and Holder reiterated his belief at the time that Gundy had always treated Black players well. Still, Gundy took a $1 million pay cut, and his rollover contract was reduced from five years to four.

He’s apparently on better footing with his players now. He was recorded while dancing in front of the team after a win over Texas last week.

“Coach Gundy is the most successful football coach in Oklahoma State’s history,” Shrum said. “We applaud what he has accomplished on the field and admire the unique culture he has created, which positively impacts the lives of the young men who come to Oklahoma State to play football and get an education.”