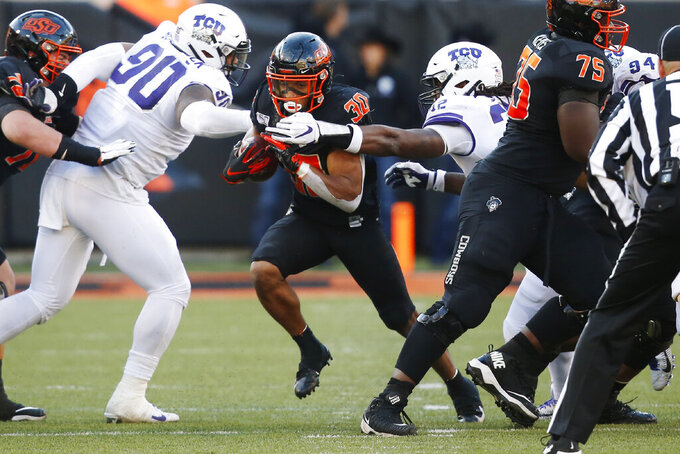 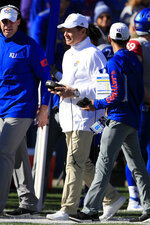 Mike Gundy remembers occasionally clashing with Les Miles when they coached together at Oklahoma State.

They will clash in a different way Saturday, with Gundy as Oklahoma State’s head coach and Miles as the first-year coach at Kansas. It will be the first time they coach against each other.

“I have really good memories of offensive football with him,” Gundy said. “He and I butted heads a lot, but in the end, we agreed and ended up on the same page. We supported each other and we were good at moving the football together. We had a good relationship.”

Gundy stepped in as Oklahoma State’s head coach after Miles took over the LSU program. Miles still appreciates many of the people he worked with at Oklahoma State.

“There's a number of people there that are good friends,” Miles said. “It's a special place. Mike Holder, the AD, is a real quality administrator. Of course, Mike Gundy is a friend.”

Their programs are in much different places right now. Kansas (3-6, 1-5 Big 12) has lost five of six, a normal skid for a program that hasn’t won more than three games in a season since 2009. Oklahoma State has played in 13 bowl games under Gundy. The 25th-ranked Cowboys (6-3, 3-3 Big 12, No. 22 CFP) have won two straight and already are bowl eligible.

Miles respects what Gundy has done at Oklahoma State.

“Any games that I could get to, I watched,” Miles said. “Mike has done a great job with the program, just taking it to heights that you'd want your program at.”

Playing against Miles, who won a national championship at LSU in 2007, is a thrill for players, too. They already see the improvement in the Kansas program. Three of Kansas’ losses have come by five points or fewer, including a 50-48 loss to Texas.

"He's obviously a very prestigious coach,” Oklahoma State receiver Dillon Stoner said. “He's well on his way to turning Kansas around. Those close games could have gone either way and Kansas just came up short. They are a great team. Great defense, great offense. We're just going to have to be ready to go."

Oklahoma State’s Chuba Hubbard could push his way deeper into the Heisman Trophy conversation with a big game. He leads the nation with 1,604 yards rushing. He faces a Kansas defense that is giving up 262 yards per game on the ground during Big 12 play and ranks among the nation’s worst — 126th out of 130 teams — overall against the run.

“Our front seven has got to make tackles,” Miles said. “He's a talented back, one of the best backs in the league certainly. The defense, this will be a great test.”

Oklahoma State will wear special uniforms to honor the U.S. military Saturday. The uniforms will feature several shades of gray. There will be a flag on the left sleeve. The words “Cowboy Battalion” will replace the name on the back.

“Doesn't make a difference to me if you come from the city or the country, if you're white or black, Democratic or Republican, I think everybody has an obligation to support the people who are willing to fight for our freedom every day,” Gundy said.

The explosive sophomore running back from Kansas has saved his best performances for ranked teams. He ran for 137 yards and caught five passes against Oklahoma and ran for 190 yards and two touchdowns against Texas. For the season, he ranks third in the Big 12 with 765 yards rushing.

With star receiver Tylan Wallace sidelined for the season, Stoner is a good bet to be the primary target for Cowboys quarterback Spencer Sanders. In his first game without Wallace two weeks ago, Stoner caught three passes for 93 yards and two touchdowns in a 34-27 win over TCU.

"The more you do it, the more comfortable you'll become,” Stoner said. “I've had more and more reps at it and that helps a lot every day going out there and working.

Miles had mixed feelings about reaching his 66th birthday on Sunday: “Yeah, I suffered another birthday. That happens, so ... glad to be amongst you.”