Ole Miss' Mingo has record performance a year after injury 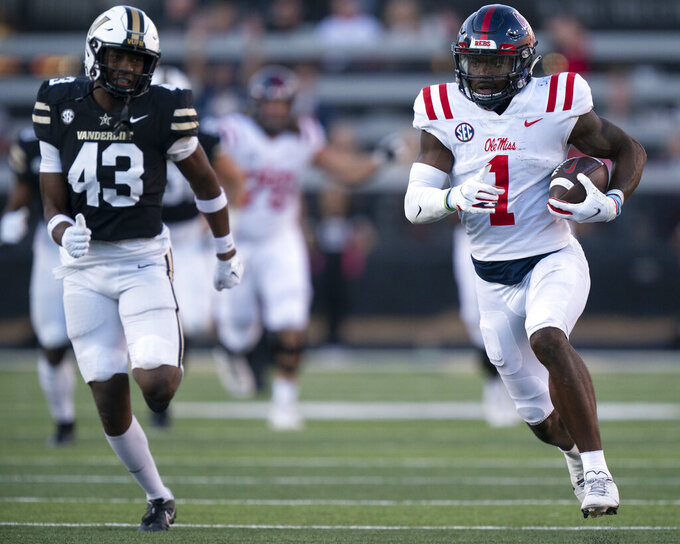 Elijah Moore was rooting for Jonathan Mingo to break his record.

“We talked after the game as soon as I got on the bus,” Mingo said Tuesday. “He was wanting me to break the record.”

Mingo had the biggest game of his career, one in which he’s battled injury and been overshadowed by 1,000-yard receivers Moore and Dontario Drummond. It was the most yards of any FBS player in a game this season and vaulted Mingo into the Southeastern Conference lead with 507 yards entering Saturday's game with Auburn.

Mingo wound up with nine catches and two touchdowns to help Ole Miss rally from a surprising deficit for a 52-28 win. The performance was even more significant to him because it came amid memories of last October that kept popping up on his phone.

That’s when he had his first of two surgeries to repair a left foot injury, desperately trying to fight a futile battle to play against Alabama. Kiffin remembers “the tears in his eyes" when Mingo realized he couldn't play, showing how much Mingo cares about the game.

“If you take a team meeting at every school and you say, who loves football, they’ll all raise their hand,” Kiffin said. “Well, that’s not true. When you really love football, you practice and prepare like this guy does. He’s just awesome to have around.”

And that's why Kiffin talked about Mingo to his team Monday. It's his whole approach, not just the record.

“He's an awesome leader by example," the coach said. "Never says anything but just works and never complains.”

Mingo broke Moore's 2020 record of 238 yards on a 9-yard pass from Jackson Dart on the Rebels' final drive.

“I told him I was going to try to break his record, so it was cool to have that happen,” Mingo said.

He also took a short pass 71 yards for his second score and is averaging 23 yards per catch —second-best nationally.

Mingo was named the SEC's co-offensive player of the week along with Mississippi State quarterback Will Rogers, his high school teammate.

Mingo already has a career-high in yards, and his three touchdowns through six games matches his total from each of the past two seasons. The passing game is starting to flourish with transfer quarterback Jaxson Dart emerging after relying more heavily on running backs Quinshon Judkins and Zach Evans early.

Dart passed for 448 yards against Vanderbilt, more than half of it to Mingo.

Mingo can appreciate all that even more after missing seven games last season with the injury.

“God put me through a lot of places, you know, just telling me just to be patient,” Mingo said. "It was a hard thing because I had a surgery last year around this time. I had it again in April to make sure everything would be straight during the season.

“So it is a blessing to be out there on the field. I don’t take no day for granted.”