Orange Bowl in mind for No. 9 Miami, No. 20 North Carolina 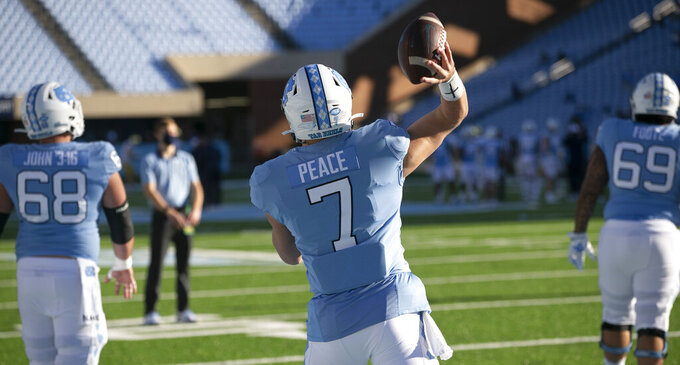 North Carolina quarterback Sam Howell (7) has replaced his last name with 'Peace" on the back of his game jersey as he warms up for the Tar Heels' game against Notre Dame on Saturday, November 27, 2020 at Kenan Stadium in Chapel Hill, N.C. Several players has done the same, choosing other messages for this particular game. (Robert Willett/The News & Observer via AP)

This game is going to play a big role in deciding the ACC’s bowl lineup. Both teams still have a shot at getting to the Orange Bowl. Miami would ensure a top-three ACC finish with a win, alongside Notre Dame and Clemson. North Carolina would get to eight wins for the first time since 2016 with a victory.

North Carolina: LB Chazz Surratt. He went to North Carolina as a quarterback for his first two college seasons and now is one of the top linebackers in the ACC, three tackles shy of 200 for his career.

Miami: DE Quincy Roche. North Carolina was one of the schools that tried to land Roche when he left Temple and entered the transfer portal last year. He’s been a leader of Miami’s defense all season.

It'll be Miami's first home game in 49 days. ... Forecasters are calling for a high of 80 degrees in the Miami area Saturday; if it gets there, it'll be North Carolina's warmest kickoff temperature this season. ... Miami coach Manny Diaz was the defensive coordinator for North Carolina coach Mack Brown when Brown was at Texas; Brown fired Diaz in the 2013 season. ... This game is the regular-season finale for both teams. Miami was still scheduled to play Georgia Tech on Dec. 19, but that game was canceled Friday. ... Of the current ACC football members, North Carolina is one of only three schools with an over-.500 head-to-head record against Miami. The others: Notre Dame (18-8-1) and Georgia Tech (13-12). ... North Carolina won last year’s meeting 28-25, converting a 4th-and-17 on its final drive on the way to the eventual game-winning TD in a matchup where Miami gave up 10 points on the Heels’ first eight plays, plus missed two field goals and an extra point.