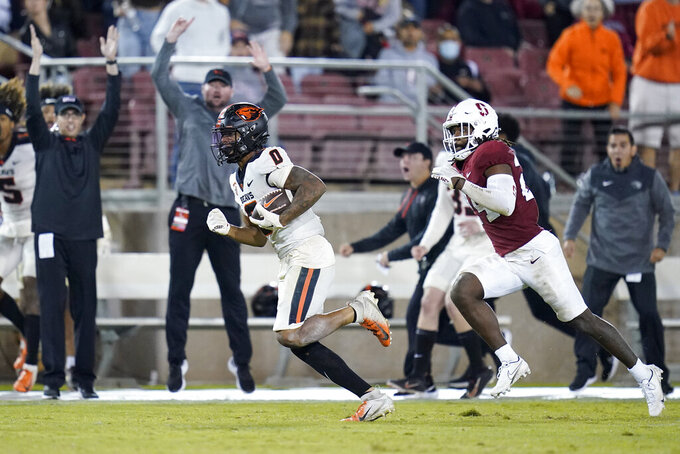 Oregon State wide receiver Tre'Shaun Harrison (0) runs after a catch for a 56-yard touchdown against Stanford during the second half of an NCAA college football game in Stanford, Calif., Saturday, Oct. 8, 2022. Oregon State won 28-27. (AP Photo/Godofredo A. Vásquez)

Ben Gulbranson threw a 56-yard touchdown pass to Tre'Shaun Harrison with 13 seconds remaining and Oregon State overcame a 14-point deficit in the fourth quarter to beat Stanford 28-27 on Saturday night.

“We keep fighting until the last second,” Gulbranson said. “With this team, anything is possible.”

The Cardinal (1-4, 0-4 Pac-12) appeared to be in control of the game when they took a 24-10 lead into the fourth quarter with Oregon State (4-2, 1-2) using a backup quarterback. Instead, they collapsed down the stretch and lost their 11th straight game against an FBS opponent.

“I’m not going to be all sunshine about us playing our best game because we have to finish,” coach David Shaw said. “We had a chance to put the game away and didn’t do it.”

Gulbranson threw a 21-yard TD pass on fourth down to Silas Bolden on the second play of the fourth quarter to start the comeback.

“That was definitely a spark plug for us,” Gulbranson said. “We rode that energy and finished pretty strong.”

Damien Martinez added a 43-yard touchdown run to make it 24-22 but the Beavers missed both 2-point tries to keep Stanford in the lead.

The Cardinal nearly out the clock before settling for a 46-yard field goal with 58 seconds left.

But Gulbranson needed only three plays to go 76 yards for the win. After two short completions, he took a shot down the sideline for Harrison, who leaped over Ethan Bonner for the catch. Patrick Fields appeared in position to make the tackle but Harrison got by him for the score.

Gulbranson finished 20 for 28 for 250 yards and two TDs in his first collegiate start in place of the injured Chance Nolan.

He also authored the third comeback from 14 points down to start the fourth quarter in school history. The only other times it happened, according to the Elias Sports Bureau, came in 1981 against Fresno State and 2018 against Colorado.

Tanner McKee threw two long touchdown passes to Brycen Tremayne but it wasn't enough for the Cardinal, who haven't beaten an FBS team since topping Oregon on October 2, 2021. Stanford set a school record with its 10th straight conference loss.

When the Cardinal drove 78 yards on their opening possession for a 1-yard TD by Casey Filkins, it left them in an unusual spot.

It marked the first time since October 30, 2021, against Washington that Stanford led a game at any point against an FBS opponent. The Cardinal had gone seven full games and 431 minutes, 44 seconds of game action between leads.

Oregon State: After losing back-to-back games against ranked opponents USC and Utah, the Beavers were able to get back on track against an easier opponent. With Nolan (neck) and star tight end Musgrave (knee) sidelined, Oregon State struggled to get going offensively until the fourth quarter but did enough for the win.

Stanford: The Cardinal had been outscored 20.4 points per game during the 10-game skid against FBS teams coming into the game as they were rarely competitive. This loss might have been even more painful as they seemed to have the game under control until the end.